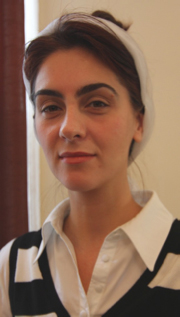 Bio: Got a sweet tooth? Sunnyside, Queens, is a good place to go. The Romanian bakeries clustered around Queens Boulevard are known for their delectable pastries and delicious coffee. Romanians have been in this part of Queens for a couple of generations, supplemented in recent years by a wave of new immigrants who left the former communist country after the 1989 revolution. Like many of its Balkan neighbors, Romania is composed of several people groups from different territories forced together into one country. For centuries it was controlled by foreign powers, including the Ottomans, the Austro-Hungarians, and the Russians. Romania became an independent monarchy with its own king in 1878. After World War II, it was occupied by the Soviets, who overthrew the king and installed one of the most oppressive communist regimes in the world. Forty years later in December 1989, Romanians rose up in revolt. After two weeks of bloody fighting, the ruthless dictator Nicolae Ceausescu was executed on Christmas Day. Today, approximately 72 thousand people in Metro New York identify themselves as having Romanian ancestry (ACS 2010). Besides ethnic Romanians from Romania, other groups with Romanian ties include Romanian Jews; Romanians from Moldova, a former Soviet satellite; ethnic Hungarians from Transylvania, which became part of Romania after World War I; and Aromanians, who are a related group primarily from the Balkans, especially Greece and Albania.

When Did They Come to New York? Among the crowded Jewish tenements on Manhattan’s Lower East Side in the late 1800s, the Romanian quarter stood out as very lively place. Jews were the first Romanians in Metro New York, fleeing the anti-Semitic persecution that swept Eastern Europe in the 1880s. They were followed by Romanians from areas under Austro-Hungarian rule and Aromanians in the early 1900s. Waves of Romanian refugees, mostly educated professionals, arrived during World War II and the Communist Era. After the 1989 revolution, thousands of Romanians and Moldovan Romanians—doubtful of the future at home—chose to start new lives in the US.

Where Do They Live? The Romanian quarter in the Lower East Side is long gone, and many descendents of Romanian immigrants, eager for upward mobility, moved out of the ethnic neighborhoods. However, Sunnyside, Ridgewood, and Astoria in Queens are still home to thousands of Romanians. Bridgeport, Connecticut, has had a large population of Aromanians since the early 1900s.

What Do They Believe? “Romanians in Metro New York are difficult to reach. They seem hardened, unwilling to consider the gospel,” claims one Romanian church leader. It is not surprising, considering new arrivals grew up in an atheistic state, while many second- and third-generation Romanians deliberately leave the old communities and churches established by their ancestors. Although eighty percent of Romanians belong to the Romanian Orthodox Church, which has six churches in Metro New York, only a fraction are actively involved. Other groups, while much smaller in number, are more devout, such as ethnic Hungarian Romanian Catholics and evangelical Protestants. Catholics and evangelicals (mostly Baptists and Pentecostals) were heavily persecuted by the communists in Romania. In the US, they tend to be more conservative than their American counterparts, and Roma- nian Jews have essentially assimilated into mainstream Jewish communities by now.

What Are Their Lives Like? “Long live the king!” Whereas some Romanians in Metro New York are actively working to restore Romania’s royal family to power, others are deeply opposed to the monarchy. Romanians are a diverse people with equally diverse views on issues. Many Romanians, newcomers as well as the second and third generations, want to forget about Romania and focus on achieving success here. Others keep a strong connection to their mother country by actively supporting Romanian charities and causes.

How To Pray: Romanians in Metro New York are perceived to be less open to the gospel than Romanians in other parts of the US. Pray for opportunities to break down their distrust and disinterest.