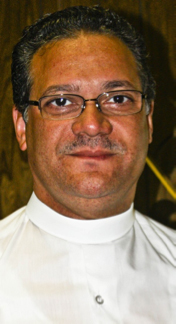 Bio: “I don’t know a Macedonian who doesn’t go to church,” said Zvonko, a Macedonia-born real estate broker who lives in New Jersey. “I wouldn’t associate with anyone who is not part of the church.” Ironically, Macedonians owe their strong religious identity to an unlikely advocate: their former communist rulers, the Yugoslavians. Hoping to win Macedonian loyalty, the Yugoslavian government established Macedonia as an autonomous republic in 1944, actively promoting Macedonian culture, language, and the restoration of the Macedonian Orthodox Church. Up to that time, the Macedonians, a southern Slavic people whose lineage includes Alexander the Great, endured centuries of occupation under the Roman, Byzantine, and Ottoman Empires. After the Ottoman Turks were driven out in 1912, Serbia, Greece, and Bulgaria fought for control of Macedonia. Under the Yugoslavians, Macedonians were finally able to develop a strong ethnic and cultural identity with the Church at the center. In 1991 after Yugoslavia dissolved, Macedonia declared its independence, managing to avoid the horrific ethnic wars that engulfed the other Yugoslav republics in the mid-1990s. However, the 1999 conflict between Serbia and Albanians in Kosovo sparked a nationalist movement among Macedonia’s Albanian minority, which makes up twenty-five percent of the population. From January to November 2001, fighting between Albanian insurgents and Macedonian forces killed several dozen people and displaced 174 thousand before a peace agreement was reached in early 2002. Metro New York’s Macedonian population numbers approximately 30 thousand, with the vast majority concentrated in northern New Jersey.

When Did They Come to New York? The first large wave of Macedonians came in the early 1900s to escape oppression by the Ottoman Turks. They established communities in industrial centers where factory work was available. The next influx of Macedonians to the US came in the 1960s when thousands took advantage of Yugoslavia’s decision to relax its emigration policies. Throughout the 1990s after Macedonia’s independence, thousands more came to Metro New York hoping to build a better life for their families. As Dimitri, a Macedonian restaurant owner said, “America was the place to go to do well.”

Where Do They Live? Metro New York’s main Macedonian communities are found in northern New Jersey. Garfield is the residential and commercial hub, home to several Macedonian businesses, restaurants, a soccer club, and a thriving immigration service. Two Macedonian Orthodox churches are located in the nearby towns of Totowa and Cedar Grove. A much smaller Macedonian community lives in College Point, Queens, where its members have established an Orthodox church and youth center.

What Do They Believe? “When Macedonians come to the US, they become more religious as a way to stay connected to their culture,” explained Gorazd, a Macedonian artist who owns a gallery in Manhattan. If asked about their faith, most Macedonians would answer as Zvonko did: “We are Christians—Christian Orthodox.” Clearly, the Orthodox Church serves as the primary social network and source of cultural identity for the Macedonian community, and most seem content with this type of tradition-based sociocultural Christianity. No evangelical churches exist among Metro New York’s Macedonian community, and few Macedonians seem to leave the Orthodox Church.

What Are Their Lives Like? “We have a stronger Macedonian community here than back in Macedonia,” said Dimitri. “We get together more to celebrate and socialize. They cannot afford to do all the things we can,” he continued. Macedonians are a very tight-knit group, and they are expected to achieve two specific goals: to take care of their families and “make something” of themselves. Dimitri, who has no children of his own, sponsored five of his nieces and nephews to come to New Jersey. His nephews are in business, and his nieces are professionals. “I am very proud of them! They have really made something of themselves,” he exclaimed.

How To Pray: Most Macedonians view church as part of their cultural identity and social life. Pray that the good news of salvation through faith in Christ would be preached in their church, drawing many into a deeper understanding of God's grace.