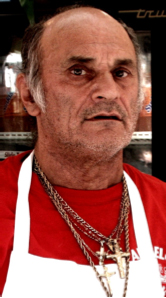 Bio: Italians have left an irrevocable stamp on life in Metro New York. From their food (Lombardi's in Manhattan's Little Italy was the country's first pizzeria) to their vocabulary (new immigrants to New York from all over the world somehow learn to say “fuhgeddaboutit” before being able to hold a regular conversation in English), New York culture has been deeply influenced by the Italians. Today, their presence is fading. Although those reporting a single Italian ancestry in Metro New York still numbered 1,697,345 in 2010, a number similar to the two million reported in 1990, their presence in New York City itself has almost halved in the same time. More striking than these numbers is that large-scale Italian immigration stopped decades ago, meaning that most Italians are second-, third-, fourth-, or fifth-generation. Many of these are “closet ethnics” who embrace their Italian identity only when it is convenient. When New York University students overheard a Little Italy restaurant owner speaking Italian to potential customers, they asked him about his language ability. The man responded, “I don't speak Italian. Not at all. But us Italians have to give the illusion of being alive and well.” Almost all Italian immigrants are from the southern part of Italy, with the majority from Sicily, the Naples area, and Calabria. Although these divisions were very sharp in the past, descendants of the first immigrants identify themselves strongly with other Italian-Americans.

When Did They Come to New York? Facing a multitude of problems in southern Italy, including the aftermath of a civil war, overcrowding, feudal working conditions, natural disasters, heavy taxation from a northern-dominated government, and scarcity of good soil, many Calabrians, Photo by Kristine Endsley Neapolitans, Sicilians, and other southern Italians left in droves to seek relief elsewhere. Between 1876 and 1924 alone, more than 4.5 million Italians came to the United States, with New York City as the top destination. During this time, Italians were generally characterized as dirty, unhealthy, uneducated, and criminal. For the most part, this impression changed after World War II when Italian-Americans joined the US military in large numbers and received a corresponding social acceptance from the larger American community. As economic, social, and educational opportunities expanded, most Italian-Americans became fully acculturated into American life. Another wave of southern Italians came in the late 1960s and early '70s, but the improved Italian economy since 1974 has kept Italian immigration at a minimum.

Where Do They Live? The “Old World” Italian neighborhoods in New York City are fading and giving life to “New World” neighborhoods in the suburbs. As working-class Italians have become Italian-American professionals, houses in Bensonhurst (Brooklyn) are being traded for those in Staten Island and New Jersey, those in Morris Park (Bronx) for Westchester, those in Corona (Queens) for Whitestone (Queens), and those in Astoria (Queens) for Long Island. Even the most recognizable “Italian” neighborhoods, such as Manhattan‟s Little Italy, are little more than tourist destinations.

What Do They Believe? At the turn of the twentieth century, Italians were often viewed by Irish Catholics as practitioners of folk religion, or even as pagans, since their celebration of patron saints and superstitious feasts diverged from orthodox doctrine. With the passing of time, some Italians became more aligned with mainstream Catholicism, while others became less enchanted with formal religion. Today, almost all Italians are at least culturally Catholic although a minority of Italian-Americans have converted to evangelical or mainline Protestant Christianity.

What Are Their Lives Like? No matter what the generation, Italians' lives center around the family. Big events such as patron saint feasts—which were once religious and are now almost completely cultural—as well as Italian soccer matches, continue to draw large families together and ensure a continued Italian identity.

How To Pray: With some Italian-Americans embracing their Italian culture only in part, identification with inherited Catholicism has also loosened. As a result, pray that a personal hunger and openness to God will occur. Pray that Italians will turn to Christ instead of the church for salvation.