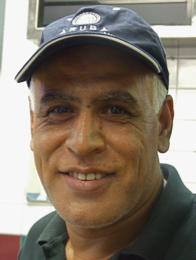 Bio: Having fled Soviet invasion, war, and even Taliban terror, an estimated 20 thousand Afghans have grown accustomed to calling Metro New York their home. However, due to the Taliban's involvement in the destruction of the World Trade Center, the world Afghan New Yorkers left behind has invaded their world once again. In the aftermath of 9/11, this once inconspicuous group faced increased persecution, scrutiny, and inter-ethnic tensions. Beforehand, the exquisite Hazrat-i-Abu Bakr mosque in Flushing, Queens, served as a religious respite for the largely Tajik- and Pashtun-Afghan Muslim population. Within a few days of the attack, though, the mosque was already dividing itself along ethnic and political allegiances. The imam at the time, ethnically Tajik Mohammed Sherzad, had long spoken out against the Taliban. Nevertheless, over half of the Afghan population in New York is Pashtun, and Imam Sherzad accused many Pashtun leaders in the mosque of being pro-Taliban. These accusations almost immediately split the congregation, and a largely Pashtun group eventually left the mosque. In 2004, however, the State Supreme Court decided that the ousted group was the mosque's rightful owners. In effect, Imam Sherzad and his largely Tajik following were forced to leave. In 2009, when it finally seemed that the dust had settled, most of Metro New York's 16 thousand Afghan Muslims were shocked to hear that Afghan coffee-cart vendor Najibullah Zazi was arrested for allegedly planning to bomb the city's transit system. The Taliban influence in Afghanistan has also driven out Afghanistan's minority groups, such as the Hindus, Sikhs, and Jews. With a decline in worship space due to arson, many Hindus and Sikhs started worshiping together and despite their religious differences formed a unique common identity. This forged identity has carried over into Metro New York, where an estimated three thousand Afghan Hindus and Sikhs live, organize, and worship together. With over two hundred families, Queens is also host to the largest Afghan Jewish community outside of Israel.

When Did They Come to New York? Allowed to leave the country in the early 1950s, most Afghan Jews emigrated in the following years to Israel and New York. It was the years following the 1979 Soviet invasion of Afghanistan, however, that brought the majority of today's diverse Afghan community to Queens. Another round of safety-seekers came after the Taliban took control of the country in 1996, and these immigrants tend to be either more secular than their average compatriots or Hindus and Sikhs who were fleeing Taliban oppression. A smaller round of immigrants came to Metro New York after America started bombing Afghanistan in 2001.

Where Do They Live? Despite the ethnic tensions, Afghans primarily live, shop, and worship in the same areas. The largest concentration is in the Kew Gardens Hills area of Queens between Main Street and Kissena Boulevard. Just north of this area in Flushing, Afghans are concentrated south of downtown, as well as in the area of their main mosque, which is east of Union Street and north of Northern Boulevard. The Hindu-Sikh population also has a large concentration in Hicksville, Long Island, and Afghan Jews are concentrated in the Jamaica neighborhood of Queens.

What Do They Believe? At the entrance of the aforementioned Hazrat-i-Abu Bakr mosque, an inscription reads, "In the name of Allah, Most Gracious, Most Merciful, enter ye here in peace and security." For most Afghan Muslims in New York, Islam is viewed as a peaceful religion that promotes knowledge, discipline, and tolerance. Many Afghan Muslims that have come to New York, especially those who fled the Taliban regime, were fairly secular upon arrival but have since become more fervent in Islamic practice. Even though Sikhs are strict monotheists and Hindus are not, their shared oppression at the hands of religious radicals has created a fusion of tolerant religious practice and identity. They worship together at a small temple in Flushing and a large one in Hicksville. In Jamaica Estates, Queens, Congregation Anshei Shalom is considered the only Afghan-Jewish synagogue in the United States.

What Are Their Lives Like? The average Manhattanite mainly crosses paths with Afghans through their ubiquitous coffee and bagel carts. Often setting up before dawn breaks, Afghans have had a corner on this market since the 1980s. If not at their coffee carts, Metro New Yorkers brush paths with Afghans at one of their several hundred fried chicken restaurants, with names such as Kennedy Fried Chicken and Crown Fried Chicken. Afghan men work hard, usually stopping only for prayers, and many Afghan women remain at home to take care of what are often large families.

How To Pray: Pray that Christian laborers would begin work among Afghans in the city. As of now, there is no one focused on reaching them with the gospel in Metro New York. Pray that the actions of Muslim fundamentalists will create doubts about the truth of Islam in Afghan hearts and minds, leading them to seek truth from Christians and the Bible.