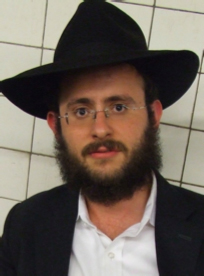 Bio: The young man in the black fedora hat calls out to people on a crowded Manhattan street, "Excuse me, are you Jewish?" He is standing next to an imposing RV emblazoned with the phrases "Moshiach is Coming Now!" and "Do a Mitzvah." Known as a mitzvah tank, the vehicle is a signature feature of the Lubavitch movement, a Hasidic Jewish group headquartered in Crown Heights, Brooklyn. Since 1974, the tanks have been parked on the streets of Metro New York while their occupants, typically young Lubavitcher men, seek to engage any Jewish person in conversation. Their goal is to get every Jew to perform a mitzvah, one of the 613 commandments found in the Torah, and they have a supply of mitzvah materials and instructions at the ready. Driving their zeal is the Lubavitch belief that the arrival of Moshiach (the Messiah) can be hastened if all Jews return to God and follow His ways. Most mitzvah tanks are adorned with a picture of the late Rebbe Menachem Schneerson, beloved seventh Grand Rebbe of Lubavitch, who led the movement from 1950 until his death in 1994. Breaking with the other traditionally insular Hasidic groups, Rebbe Schneerson crafted an aggressive, outward-facing mission for the Lubavitch: to bring non-observant Jews back into the Orthodox fold. Also unlike other Hasids, the rebbe had no problem using the tools of the modern world, including television and the Internet, to spread the message. The Lubavitch movement, also called "Chabad" (an acronym of the Hebrew words for wisdom, comprehension, and knowledge) has the second-largest following among Hasidic groups in Metro New York, numbering approximately 15 thousand to 20 thousand. Chabad has become a huge global phenomenon, with over 3,300 institutions. Crown Heights is its mecca, drawing thousands from around the world.

When Did They Come to New York? In 1940 the sixth Lubavitcher rebbe came to Crown Heights after a US-orchestrated rescue from Nazi-occupied Poland, where the Lubavitchers had fled to escape the Soviets in the 1920s. In 1941, his son-in- law Rebbe Menachem Schneerson arrived from France. Thousands of Lubavitch survivors joined them after the war. In the late 1960s, due to rising crime, much of the white population was leaving Crown Heights. Rebbe Schneerson decided the Lubavitch would stay; they would not abandon their synagogues and fellow Jews who could not afford to move.

Where Do They Live? An elegant brick mansion at 770 Eastern Parkway in Brooklyn houses the Chabad-Lubavitch world headquarters. Even though the Lubavitchers are concentrated in Crown Heights, there are over 220 Chabad institutions throughout Metro New York, including schools, camps, and Chabad Houses, which are community centers offering Torah classes and worship services. These are led by shlichim (emissaries), couples sent into communities to teach secular Jews about living an Orthodox life.

What Do They Believe? "Pick a mitzvah, any mitzvah! Instead of focusing on the religious failures of non-observant Jews, Chabad has tried to make it easier to follow Jewish law. Rebbe Schneerson taught that even performing one mitzvah brought a Jew closer to God and the Messiah closer to earth. The Lubavitchers, great messianic fervor and devotion to Schneerson led many to believe that the rebbe himself was the Messiah, a claim he neither affirmed nor disputed. Although Chabad leadership denounces the "messianists" who have continued to promote this idea, the controversy has split the movement. Tensions have been so high at times that the police have stepped in.

What Are Their Lives Like? "One of my brothers has lived in Johannesburg for twelve years. The other is in Hollywood Hills. When I get married, I'll go somewhere too," explained Yakov.* Young Lubavitchers are excited to join the ranks of the shlichim, which numbers 3,800 and is growing. These husband-and-wife teams run Chabad Houses in forty-five US states, sixty-one countries, and on one hundred college campuses.

How To Pray: Lubavitchers earnestly seek the Messiah and believe that following Jewish law will hasten his coming. Pray that they would see how Jesus fulfilled the Law and saved us through the grace of God.