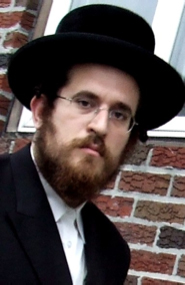 Bio: "If I were a rich man [....] I'd discuss the holy books with the learned men, several hours every day. That would be the sweetest thing of all!" sang the character Tevye in Fiddler on the Roof. Tevye's song aptly illustrates a problem with Orthodox Judaism's emphasis on study of the Torah (Jewish Scriptures) as the best way to grow closer to God, most Jews did not have the means or time for such in-depth scholarship. In late eighteenth- century Eastern Europe, a movement called Hasidism arose to challenge this tradition. Hasidim, which means "pious ones" in Hebrew, teach that prayer, mystical experiences, and joyful worship with singing and dancing are equally valid ways of drawing closer to God. Over the centuries, Hasidic Judaism has broken into numerous movements called "courts," each led by a rebbe, a spiritual leader revered for his holiness and wisdom. Metro New York is home to the largest Hasidic population in the US with an estimated 165 thousand people. The Bobover Hasidim, numbering approximately ten thousand, are the third-largest Hasidic group in Metro New York, following the Satmar and the Lubavitcher. The essence of Bobov teaching is shalom or peace. The Bobover are known for their moderation and tolerance, qualities modeled by the first American Bobover rebbe, Shlomo Halberstamm. Sometimes tolerance only goes so far, however! The Bobover split in 2005 after the death of Rebbe Halberstamm's son, Naftali. One side claims Naftali's younger brother is the rightful rebbe, while the others champion his son-in-law. The Bobover maintain two rival synagogues while the matter is before a Jewish court.

When Did They Come to New York? Hasidic Jews came late to America, opting to stay in Eastern Europe during the massive Jewish emigration from 1880-1920. Bobover Jews took their name from their hometown, Photo by Leah Gonzalez Bobowa, in the region of Galicia in southern Poland. Ninety percent of Polish Jews perished in the Holocaust, including the Bobover rebbe. Among the survivors were his son Shlomo Halberstamm and grandson, who came to New York and rebuilt the community. Bobov has attracted other Jews with its moderate and peaceful ways. Today, very few Bobovers are descendants of Polish immigrants. Instead, most were drawn to Bobov from other Jewish communities.

Where Do They Live? Observing the mass of Bobover families out for a Sabbath stroll, it is easy to see how 48th Street in Brooklyn's Borough Park received the name "Bobover Promenade." The Bobov left Crown Heights for Borough Park in the late 1960s to escape growing crime, settling along 48th Street between 14th and 15th Avenues. Their two rival synagogues are on 45th and 48th Streets. Because housing in Borough Park is expensive, some Bobovers live in other Hasidic enclaves, such as neighboring Williamsburg and Rockland County's Monsey in upstate New York.

What Do They Believe? Like all Hasidim, the Bobover's beliefs are centered on studying the Torah and obeying the 613 mitzvot (commandments), laws that cover every aspect of life and include ethical, social, and ritual obligations. At the core of Hasidic belief is the power of prayer, especially the prayers of the rebbe, to obtain miracles typically related to health or business concerns. The Bobover tend to downplay tales of miracles performed by their rebbe, focusing instead on the rebbe's holiness and wisdom. Bobover Jews are friendly with all Hasids. They do not take a political stand on Israel, unlike the Lubavitch and Satmar, who disagree vehemently on the subject.

What Are Their Lives Like? If a young Bobover man wants to pursue secular studies after the yeshiva, a religious school, the rebbe will not forbid him. This openness, uncommon among other Hasidic groups, has provided the Bobovers with a home-grown crop of professionals that serve the community. Like all Hasidim, Bobovers center their lives on family, community, and worship. They marry young, raise large families, and have defined roles. Women manage the home and children, and men have a few career options, such as rabbinical studies, teaching at the yeshiva, or entering a profession or family business.

How To Pray: The Bobover seek shalom in their lives, a word that signifies being "complete, perfect, and full." Pray that they would recognize Christ as Messiah and Sar Shalom, the Prince of Peace.