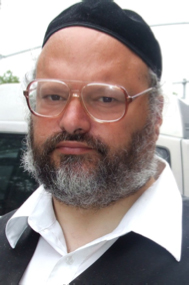 Bio: "You spoke Hebrew, you Zionist! Skip three turns and pay $500." So reads one of the "repentance" cards in Handl Erhlikh (Be Virtuous), a Monopoly-like board game designed to teach young Satmar girls how to live a pure Jewish life. The Satmar are the largest Hasidic group in Metro New York, with an estimated 65 thousand followers. Their extreme anti-Zionist position has put them at odds with most of the Jewish world, which supports the nation of Israel. However, such contradictions and conflict pervade the Satmar story. In 1944, as the Nazis moved into Hungary, the Satmar rebbe, Joel Teitelbaum, was one of 1,700 Jews rescued by the Zionist leader Rudolph Kastner. Despite this, Teitelbaum was an unyielding opponent of the Zionist movement, indoctrinating the Satmar with the idea that modern Israel is an ally of Satan. The Satmar's resistance to the modern world is another study in contradiction. While forbidden to watch television themselves, they sell them to others, operating thriving consumer electronics businesses, such as B&H Photo Video in New York City. The Satmar are also no strangers to conflict. They have feuded for years with the Lubavitcher, the other Hasidic "superpower," over support for Israel and the Lubavitcher's outreach to non-Orthodox Jews. Recent internal conflict has devastated the Satmars as well. Since the death of Rebbe Moishe Teitelbaum in 2006, two of his sons have been fighting to succeed him. The Satmar are now split into two warring camps and have taken their fight to the New York State Supreme Court.

When Did They Come to New York? After his rescue, Rebbe Joel Teitelbaum came to New York in 1947. Other survivors followed, and the Satmar (whose name comes from their hometown of Satu-Mare) settled in Williamsburg, Brooklyn. By the early 1970s, the Satmars needed more space. They purchased land in Orange County, New York, an hour's drive from the city. The new community was named Kiryas Joel, Joel's Village, after their beloved rebbe.

Where Do They Live? Although the two Satmar worlds, urban Williamsburg and semi-rural Kiryas Joel, look very different, they are much the same. While Williamsburg's gritty streets are packed with crowded apartment buildings and shops, the winding roads of Kiryas Joel are lined with single-family homes, townhouses, and a couple of shopping centers. However, each community is centered on the besmedresh, or the house of study, and the synagogue. The most common feature in both areas? The enormous number of children! Williamsburg's playgrounds are dominated by young Satmars, while dozens of children play in the front yards of Kiryas Joel. Baby strollers and tricycles are everywhere, chained to fences in Kiryas Joel and parked in Williamsburg apartment lobbies.

What Do They Believe? O daughters of Jerusalem [...] do not awaken love before it pleases." Satmar Rebbe Joel Teitelbaum used this verse from Song of Solomon as his basis for believing that the founding of Israel was an act of impatience and a failure to wait for the Messiah to establish the promised kingdom in Jerusalem. Teitelbaum also taught that the Holocaust and the continual bloodshed in the Holy Land were direct punishment to Jews for usurping the role of the Messiah. Thus, the Satmar are not allowed to show any support for Israel or even speak modern Hebrew.

What Are Their Lives Like? "We do believe in family planning, we plan to have families of sixteen to eighteen children!" This half-joking response was attributed to a Kiryas Joel resident defending the Satmar's prohibition of birth control. The birthrate among the Satmar, now at ten children on average per woman, is possibly the highest among any group in the US. With large families and very limited job opportunities, poverty is rampant among the Satmar. Kiryas Joel is now the poorest community in the US, with two-thirds of the residents living below the poverty line and forty percent receiving food stamps.

How To Pray: The Satmar communities in Williamsburg and Kiryas Joel are very insular. With no known Christians from a Satmar Jewish background and with limited access into the Satmar community by outsiders, pray that God reveals that Jesus is the Messiah in creative and powerful ways.