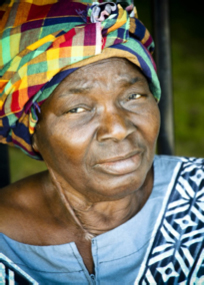 Bio: Imagine passing a young man on a New York City street who looks vaguely familiar. Suddenly, you have a terrifying flashback: His face appears among the gang of teenagers who dragged you from your bed, murdered your father before your eyes, and raped your mother and sisters. Many Liberians in Metro New York have experienced similar horrors. Atrocities abounded during Liberia's two civil wars (1989-2004), killing more than 250 thousand people. Most notable was the conscription of child soldiers, forced to torture and kill in order to survive. Liberians find it very painful to talk about the war. Many feel such discussions are too risky, since perpetrators and victims live side by side, often worshipping at the same churches. Most want to forget the past and focus on Liberia's future. Today, an estimated 35 thousand Liberians live in the New York Metro area, including a large concentration of former child soldiers. These traumatized young men typically deny their identity for fear of rejection and retaliation. Additionally, thousands of Liberians live under a cloud of uncertainty. When their Temporary Protected Status from the US government expires in March 2010, they may have to return to Liberia, leaving jobs and family behind, or risk remaining here illegally.

When Did They Come to New York? Despite its history as Africa's oldest republic, founded by freed American slaves in 1847â€”Liberia plunged into chaos in the 1980s. Over the next two decades, 1.5 million people were displaced. Many remain in refugee camps in West Africa. Thousands resettled or sought asylum in the US. Before then, only a trickle of Liberians came to America. Almost all Liberians in the New York Metro area arrived during the two worst periods of conflict: 1989-1996 and 1999-2003.

Where Do They Live? Metro New York is home to the largest concentration of Liberians outside of Africa, with the most populous communities in Staten Island and Newark, New Jersey. "Little Liberia" in Staten Island centers around the Park Hill Apartments, a group of twelve run-down high-rise apartment buildings primarily populated by Liberians. This former public housing project, which hosts makeshift African markets in the warmer weather, is a stark contrast to the surrounding suburban homes that mark the mostly white, middle-class enclave of Staten Island. Liberian businesses in Staten Island are most concentrated along Targee Street from the neighborhood of Clifton into the adjoining neighborhood of Stapleton.

What Do They Believe? Liberia has strong historic ties to Christianity; its American-born founders established it as a Christian republic and actively sought to convert the indigenous tribes. While much of the coastal population became Christian, the interior tribes retained traditional African religions or Islam. In the New York Metro area, ethnic Mandingoes and Vais, who are Muslim, have a presence, but the vast majority of Liberians (ninety-five percent) are Christian. Several Liberian churches and ministries are active in Staten Island and Newark, representing Baptist, Lutheran, Episcopalian, Methodist, Catholic, and various Pen- tecostal denominations.

What Are Their Lives Like? Dealing with the past is difficult for all Liberians, who desperately seek healing and peace. While the primarily urban-professional Liberians who arrived during the first civil war successfully adjusted to life in the US, later arrivals have faced more challenges. Most had lived in refugee camps for years, where they experienced repeated violence, family breakdown, lack of education, and unemployment. The Park Hill neighborhood, home to most recent arrivals, is now plagued by drugs and gang violence, and families are often headed by single mothers or grandparents. Those with financial resources typically support family members in Liberia or refugee camps. In an effort to bring closure, the Liberian Truth and Reconciliation Commission is collecting war stories to document atrocities; however, many people do not want to relive the past. They want to move forward.

How To Pray: Most Liberians have experienced brutal violence, often at the hands of neighbors or friends. Pray for healing, forgiveness, and reconciliation and that Christians will lead the way in this process. Pray that former child soldiers come to live transformed lives through the power of the gospel.