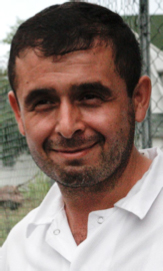 Bio: "Americans find us confusing. They ask, are you European or Middle Eastern? Western or Eastern?" Mehmet,* a Turkish language teacher, smiled as he explained, "I say we are a little of everything!" The nation of Turkey, descended from the mighty Ottoman Turkish Empire, literally sits as the bridge between the East and West, half on the continent of Europe and half in Asia. The Ottoman Turks once held vast power in the Middle East and Central Asia but began to decline in the sixteenth century and gradually lost most of their territory. Following Turkey's defeat in World War I and a bitter war with Greece, the Republic of Turkey was established in 1923 by Mustafa Kemal, known as Ataturk, or "Father of the Turks." Ataturk desperately wanted Turkey to be a modern nation, so he instituted aggressive reforms to subjugate Islam to the government and eliminate all ethnic and linguistic differences among the people. His efforts made Turkey into a thoroughly secular state, despite being ninety-eight percent Muslim, with a diverse population fused into one Turkish identity. As Mehmet explained, "My grandmother is technically a Georgian, but she has lived in Turkey all her life. She would be offended if someone said she wasn't Turkish." Metro New York's Turkish population is estimated to number 70 thousand. While most simply identify themselves as Turk, others come from Turkish minority groups such as the Karachay, Circassians, Crimean Tatars, Azeri, and Meskhetians. Small numbers of Kurds (an Indo-Persian people) and Laz (who are descended from Greeks) are also present.

When Did They Come to New York? The Karachay and Circassians were the first groups of Turks to arrive in Metro New York just following World War II. Both established communities in Paterson, New Jersey, that continued to grow steadily. Most Turkish immigrants in Metro New York, however, are far more recent arrivals who fled Turkey's financial crisis in 2001, seeking jobs and economic stability. Many young Turks come to get a US college degree, hoping to secure a job that will provide them with a business visa. Turkish citizens are one of the fastest growing groups of foreign students in the US.

Where Do They Live? Turks have formed several distinct communities in Metro New York. The oldest and largest Turkish community in the US is in Paterson, New Jersey, which is also home to thousands of Palestinians. Turkish shops and restaurants stand next to their Arabic counterparts on Main Street. In West Haven, Connecticutâ€™s Turkish capital, one can find Turkish food on Campbell Street and a mosque with a view of the water. Sunnyside, Queens, has a large and growing Turkish community, and many wealthier, professional Turks have moved to suburban Long Island.

What Do They Believe? "If you have eight Turks in a room, there might be four levels of loyalty to Islam," explained Sue,* a missionary to Turks in New Jersey. Because of Turkey's secular status, Turks have been free to practice their faith as they please; however, many conservative Islamic traditions, such as women wearing headscarves, have been prohibited at times. While most Turks continue to be secular Muslims when they come to Metro New York, many others find that living in the US allows them to practice a more conservative version of Islam than they could in Turkey. The vast majority of Turks in Metro New York are Sunni Muslims although there is a Turkish Sufi order in Rockland County. The one Turkish church in New Jersey, a spiritual home for several believers, was just started in the last few years with several new converts to Christianity.

What Are Their Lives Like? "Many Turks heard bad things about Americans back in Turkey," Sue noted. "When they come here, they see those things aren't true. Still, many remain in their own enclaves, just to be safe." Turks deeply value family and friendships although it takes time to build relationships with them. Because ethnicity was downplayed in Turkey, Turkish groups here really enjoy celebrating their culture. The Karachay and Circassians, for example, have active cultural associations in New Jersey.

How To Pray: Pray for the small group of Turkish believers in New Jersey, many of whom are the only Christians in their families. Pray for growth in their love and knowledge of the Lord. Several missionaries are known to be living among Turkish communities in Metro New York. Pray that they will be able to build strong relationships in the community and have opportunities to share the gospel in multiple venues.