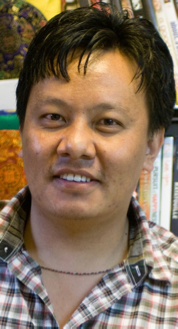 Bio: Back home in Nepal, Tsering used to guide mountain climbers attempting the ultimate test of human survival: conquering Mount Everest. Some might argue his current job, driving a taxi in downtown Manhattan, can be equally as hazardous! It is a long way from the clear thin air of the Himalayas to the smog-filled streets of Queens, but a growing number of Nepali Sherpas have chosen to make Metro New York their home. In fact, New York's Sherpa population is the largest outside Nepal and India. The Sherpa are just one of many ethnic groups that comprise Metro New York's Nepali community of approximately 30 thousand. Nepal, a monarchy for most of its history, forced its king to abdicate in 2008 after twelve years of civil war led by the communist party. At the crux of the conflict were centuries of pervasive ethnic and religious discrimination. Since the mid -1800s, the Bahun-Chhetri, a high-caste Hindu group, has held power over Nepal's sixty-five indigenous, primarily Buddhist groups known collectively as Janajati, as well as the Madhesi, who live in the southern plains of Nepal. These groups are currently fighting to secure rights and power in the new government of Nepal, which is still very unstable and on the brink of financial collapse.

When Did They Come to New York? Very few Nepalis came to Metro New York until the 1990s, when political tensions began brewing in Nepal. Most arrived after the 1996 communist insurgency began and during the resulting civil war, which scared off tourists from the Himalayas and forced thousands such as Tsering to search for work elsewhere. Ongoing turmoil and repeated strikes in the cities shut down universities and businesses, driving students and professionals to the US to finish their education or find steady work. Nepalis are continuing to arrive to escape the political chaos at home.

Where Do They Live? Queens is Nepali central! In Ridgewood, there are a few apartment complexes near Wyckoff Avenue comprised almost entirely of Nepali people. In Sunnyside, Nepalis live be- tween 37th and 52nd Streets. A few Nepali stores and restaurants can be found close to Roosevelt Avenue and 74th Street in Jackson Heights, the heart of the "Little India" commercial district. Woodside also has many Nepalis living among the Indian and Bangladeshi communities.

What Do They Believe? Nepal had been a Hindu monarchy for over 250 years until the government declared it a secular state in 2006. The Hindu kings who united Nepal in the late 1700s forced many of the indigenous Janajati groups, who mostly followed Buddhism, animism, or ancestor worship, to convert to Hinduism. As a result, many Janajati practice a mixture of Buddhism and Hinduism, while also retaining their animistic core. Nepali Hindus (mainly the Bahun-Chhetri and Madhesi) are far more connected to their religion, and many attend temples in Ridgewood, Elmhurst, and Jackson Heights. The Janajati have proven to be quite receptive to Christianity in Nepal, and one church that focuses on the Nepali community has recently been founded in Woodside, Queens. There is also an organization in the same area that has Nepalis involved in ESL classes and Bible studies.

What Are Their Lives Like? "For us, New York is not a melting pot. It's a money pot," explained Paramendra, a young Nepali man. Since Nepal is one of the poorest countries in the world, Nepalis who come to Metro New York have one goal: make as much money as possible. Most work twelve to fifteen hours a day, six or seven days a week. Men are typically taxi drivers or work in restaurants or grocery stores, while women find jobs as housekeepers and nannies. They often live in groups, crowding as many as eight people into an apartment to save money. Their lives are built around relationships within the culture of their ethnic community. Nepalis in Metro New York are very active, with dozens of cultural and political associations that keep them connected to each other and engaged in Nepal's political situation. As one man said, "Nepalis may not know who the mayor of New York is, but they know everything happening back in Nepal!"

How To Pray: Many Nepalis are insulated in their communities, having little contact with Christians. Pray for greater opportunities to minister to some of their specific needs, such as learning English, as ways to build relationships and introduce them to Jesus Christ.