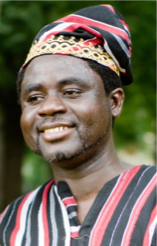 Bio: Growing up in America, some kids dream of being a prince or princess. Growing up in Nigeria, some princes dream of being American. Such was the case with Ali, a Nigerian prince who was next in line to be king. When his father died, Ali refused the crown, preferring to raise his family in New York where he could receive more education and see the world. On the whole, Nigerians in New York have pedigrees similar to Ali's, with an over-whelming number coming from the middle and upper class. Despite being born with status, over 36 thousand Nigerians (ACS 2010) have left their country and currently reside in Metro New York. Amazingly, living in New York, at least for a few, is better than being king. While Nigeria is made up of over 250 ethnic groups, the most populous groups (the Yoruba, Igbo, and Hausa) are those mainly represented in Metro New York. The Yoruba make up the majority of Nigerians in the city and are from the southwestern area of Nigeria, which includes the capital Lagos. The Igbo make up the majority of other Nigerians in Metro New York and hail from the southeastern part of the country. The Hausa are from the northern part of Nigeria. Due to their prominent political status, military positions, and relative success, they have not desired to immigrate to America as much as the other two groups.

When Did They Come to New York? With the discovery of oil in the 1970s, Nigeria quickly became one of the wealthiest African countries. During this time, many students came to America for education. In the 1970s and 80s, Nigeria was even among the top six countries that sent students to America. Following plummeting oil prices in the late 1970s and a stream of corrupt military rule that continued into the 1990s, many bright students sought out the education, employment, and political security that America offered. With the end of military rule in 1999 and the Nigerian economy booming once again, the same Nigerian professionals that opted to stay in America are beginning to look at career options in their home country. Lured by a chance to help Nigeria, not to mention the possibility of benefits like housing, maids, vehicles, and drivers, living as "a king" in Nigeria is resonating with Nigerian Americans much more now than it did in previous decades. Even if waiting until retirement is necessary, most Nigerians plan on moving back to their country.

Where Do They Live? Most West Africans in Metro New York cluster together in the same neighborhoods with their compatriots. Nigerians, on the other hand, are much more spread out, as they prefer to buy homes wherever they get the best deal and can live most comfortably. Nevertheless, there are three main Nigerian clusters in the Metro area, including the Unionburg-Newark Heights area of New Jersey, East New York in Brooklyn, and Concord-Fox Hills in Staten Island.

What Do They Believe? With a history of civil war and friction between the mainly Muslim north and mainly Christian south of Nigeria, one would think that religious and ethnic tension would spill over into America. Instead, the common thread of being Nigerian keeps people from different groups closely connected. Over half of the Yoruba in the city identify themselves as Christian, and slightly less than half are Muslim. Almost all of the Igbo are Catholic Christians, and there are even a couple of weekly Igbo Masses in Queens. In direct contrast, almost all of the Hausa are Muslim.

What Are Their Lives Like? Whether working as a cab driver even though one has a master's degree, or going to school all over again even though one is a doctor, Nigerians have been willing to persevere through difficult circumstances to obtain success in America. Most Nigerians carry on with the same line of work as they did back home. The Yoruba, for instance, strongly value education and often have jobs in the law, medical, or education industries. The Igbo are known for their entrepreneurial ability and often start their own African shops and restaurants throughout the city. The Hausa are heavily involved in the military and politics and make up a bulk of the Nigerian Consulate's employees.

How To Pray: Due to religious friction in their country, many Nigerian Christians are reluctant to share the gospel with their Muslim friends. Pray that they would lovingly and boldly share their faith. Pray that Nigerian churches would focus on the glory of God in all circumstances and not just in "health and wealth."