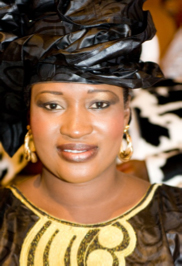 Bio: On July 28th of every year, the Wolof gather at the northern tip of Central Park and march their way through Harlem up to bustling 125th Street, the men dressed in bright-colored bubus (outfits with shirts that extend past the knees and matching pants) and the women wearing white African dresses with matching head wraps. The few children actually raised in America lead the pack, followed by religious leaders from Senegal in a stretch limousine. A throng of religious devotees comes next. During their brief respite from grueling work schedules, they chant poetry by their religious sect's founder Amadou Bamba, catch up with their compatriots, or chat on their cell phones with family members in Senegal. Most Senegalese in Metro New York are Wolof, which is the most influential ethnic group in the country of Senegal, a country located on the west coast of Africa. Among the Wolof in Metro New York, most are Mourides, members of a Sufi Muslim religious movement founded by Amadou Bamba in the late 1800s, which emphasizes solidarity, hard work, and submission to one's marabout, an Islamic leader. The July 28th Amadou Bamba Day, complete with parade and evening conference at the United Nations Headquarters, has around two thousand participants annually, making it much larger than even Harlem's Pan-African Day Parade. There are an estimated 30 thousand Senegalese in Metro New York, seventy percent of whom are Wolof. Rounding out the Senegalese population is a primarily Fulbe community, many of whom came to Senegal as refugees from Mauritania.

When Did They Come to New York? Due to France's 1974 resolution to allow fewer immigrants from Senegal, and due to economic hardship in their country, many Senegalese started making their way to New York in the 1980s. Immediately, they carved an economic niche for themselves in the street-vending business. By 1984, many Senegalese came to study at local universities. Other educated Senegalese came for business purposes. The Senegalese influx into Metro New York continued rapidly until 2001 when stricter immigration policies and rising living expenses leveled off the Senegalese population in the city. Most of the Senegalese in Metro New York have emigrated from the capital city of Dakar.

Where Do They Live? While the stretch of 116th Street in Harlem from Frederick Douglass Boulevard to Lenox Avenue has been dubbed "Little Africa," it is also more specifically nicknamed "Little Senegal" due to the disproportionate number of African businesses and restaurants owned by Senegalese. Many Wolof and other French-speaking West Africans are concentrated around this street, which hosts around ten African restaurants. The second-largest African commercial district in New York City is found along Brooklyn's Fulton Street, from Franklin Avenue to Bedford Avenue in Bedford-Stuyvesant. This area hosts a large concentration of Fulbe people from Senegal, Mauritania, and Guinea.

What Do They Believe? Along 116th Street in Harlem, stores with names like "Touba Wholesale" and "Touba International Flavor" are adorned with Quranic verses, images of Amadou Bamba, and special charms from the store owner's marabout to ensure financial blessing. While the Mourides are devout Muslims, their practice of Islam is not considered orthodox by others, as they have an extreme devotion to their individual marabouts living in the holy city of Touba in Senegal. In Mouridism, Touba is revered as much as Mecca, and Amadou Bamba is revered as much as Mohammed. Non-Mouride Wolof and Fulbe mostly belong to the Tijani branch of Sufi Islam, and each group has its own mosques in the city.

What Are Their Lives Like? Hard work defines Senegalese life in Metro New York. Many men leave their wife (or wives) and children in Africa while they work long hours in America to build a home and better life for their family in Senegal. Almost all Senegalese actively plan to return home one day.

How To Pray: Despite several decades of missionary work in Senegal, there are still only around one hundred evangelical Christians out of the 4.5 million Wolof in the world. Pray for a church planter to move to New York to minister among the Wolof in their own language or in French and that Wolof would start responding to the gospel.