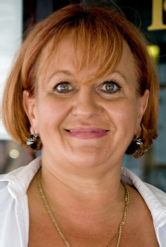 Bio: Few immigrant groups have as much of a muddled national identity as Ukrainian-Americans. Throughout the first three waves of ethnic Ukrainian migration to America, Ukrainians left a land controlled by outsiders. Depending on the time and location, Ukraine was controlled by Poland, the Austro-Hungarian Empire, or the Soviet Union. Since the independence of Ukraine in 1991, there has been another large influx of "Ukrainians," but most of these have been ethnic Jews with little national identity. Nevertheless, Ukrainian-Americans have organized and socialized as such for over a century. Out of an estimated 400 thousand Russian-speaking Jews in Metro New York, the largest number (thirty-six percent) hail from Ukraine. Using figures from the same study, one could estimate Metro New York's non-Jewish Ukrainian population to number 36 thousand, but this figure only accounts for Russian-speakers, and many Ukrainians do not speak Russian. The curator of the Ukrainian Museum in New York estimates that there are 70 thousand non-Jewish Ukrainians in Metro New York. Whatever the number, there are divisions in the Ukrainian community much deeper than Jew or non-Jew. Around seventy-five percent of ethnic Ukrainian immigrants come from the western part of the country, and as one of their community leaders claims, "The eastern part is highly influenced by Russian propaganda." Western Ukrainians primarily speak Ukrainian and might understand Russian, but about half of eastern Ukrainians speak Russian as their primary language.

When Did They Come to New York? While Pennsylvania was the destination of choice for the first wave of Ukrainian immigrants at the end of the nineteenth century, New York City became a prime destination for the second wave, which came after World War I. After World War II, displaced Ukrainians who were lucky enough to find America sponsors made their way to New York to create a third wave of immigration. Starting in the 1970s but escalating in the '90s, a large fourth wave of immigration has primarily consisted of ethnic Jews. While some were genuinely escaping from anti-Semitism, many found that their Jewish identity, sometimes loosely held, created a unique opportunity to relocate to New York. Around eighty-five percent of these Jews came with full refugee status. Inconsistent and corrupt governments have continued to fuel Ukrainian emigration in the twenty-first century.

Where Do They Live? Often depicted as Russia or Ukraine in a time capsule, Brighton Beach, Brooklyn, just a short walk from Coney Island, is the "Russian amusement park" for immigrants from the former Soviet Union. With its location by the sea, many Ukrainians from Odessa have settled there to remind them of home. Over the years, it has garnered the reputation as a seedy place only fit for the elderly, illegal, or newly arrived. Neighborhoods north of the area in Brooklyn have become much more desirable. For the less "Russified" western Ukrainians, East Village in Manhattan has long hosted the largest concentration, even though areas of New Jersey are becoming more popular.

What Do They Believe? "Everyone practices Christianity," George Gajecky, Vice-President of the Ukrainian Educational Council, boldly claimed in describing Ukrainian religious beliefs. He added, "The Ukrainian culture is based within religion, so to be a part of this culture, you must practice religious things." Obviously, these statements do not take into consideration Jews from Ukraine, who are largely secular but practice Judaism more the longer they are in New York. A generally accepted statistic is that in New York there are up to twice as many Eastern Catholics, who come mostly from the Galicia region of west Ukraine, as Eastern Orthodox adherents, who come mostly from east Ukraine. Of the non-Jewish Ukrainians, Protestants number up to ten percent and, recently, hundreds of Ukrainian Jews have converted to Christianity.

What Are Their Lives Like? Ukrainian immigrants have a very high level of education. While many are able to continue work in their fields, others with few English skills or with certifications that do not transfer to America, end up working in house cleaning or construction. Restaurants that resemble night clubs are extremely popular, and Saturday Ukrainian-heritage schools have been started to educate the second generation.

How To Pray: Many Jews are averse to Christianity due to the Holocaust, during which Jews were killed by Germans "in the name of Jesus," and many Eastern Orthodox Christians view evangelicals as cult-like. Pray that God would remove these barriers and reveal the true essence of evangelical Christianity through Christ.