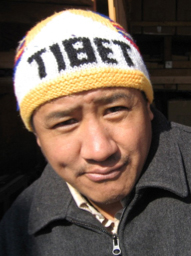 Bio: Sonam Tashi, a Tibetan man whose father was killed by Chinese border patrol when he was three years old, comes on March 10th of every year to a plaza by the UN building, rallying on behalf of a free Tibet. He solemnly claims, "Every people need a freedom [....] Lot of people in China are not free." It has been about fifty years since the Chinese occupied Tibet, and the sting is still felt by the estimated three thousand Tibetans who now live in the New York Metro area. On the March 10th National Tibetan Uprising Day, hundreds of Tibetans and sympathizers march to the UN and Chinese Consulate, shouting such cries as, "China lie, people die," and, "China out of Tibet now." While New York is where they live, it is certainly not their home.

When Did They Come to New York? For centuries, Tibet was an isolated country. Very few came in. Very few went out. All of that changed in 1949 when the Chinese took control of Tibet, an act that led tens of thousands of Tibetans to resettle in India and Nepal. The Tibetans' struggle for their homeland has continued ever since. During the following decades, immigration slowly began to the US, but it was a 1990 immigration visa opportunity for one thousand displaced Tibetans that initiated a large immigration. From the late 1990s to the current time, Tibetans have been streaming into New York City on family reunification visas or tourist visas that they overstay. The city retains most of these immigrants due to the abundance of service jobs available and its friendliness towards the undocumented.

Where Do They Live? While there is no overt "Little Tibet" in Metro New York, many Tibetans and Tibetan businesses are clustered in Jackson Heights (Queens) and other South Asian neighborhoods. Tibetans can also be found in Astoria (Queens), Crown Heights (Brooklyn), south and east of Midtown Manhattan, and in Newark, New Jersey.

What Do They Believe? Tibetans have largely resisted attempts of evangelization by Christians, as they see their identity as inextricably linked with their religion of Tibetan Buddhism. The much-publicized Dalai Lama is considered a "god-king," a political and religious leader to the Tibetans. Tibetan Buddhism also encompasses the Bon religion, which contains elements of witchcraft and the occult. Although Americans and other Westerners practice Buddhism at increasingly popular "Tibetan" meditation centers, Tibetans are more likely to practice Buddhist rituals in front of their shrines at home. Some say they find it difficult to find time to pray and meditate because of the demands of work and daily life in their new country. Some believe Buddhist monks do the spiritual work for them.

What Are Their Lives Like? Tibetans in Metro New York enthusiastically attend cultural events such as the Tibetan New Year and Buddha's birthday party. Cultural events also receive support and publicity from American groups who feel sympathetic towards the Tibetan exile situation. In October 2007, a huge celebration took place in Manhattan's Union Square in honor of the Dalai Lama's visit and his selection for the US Congressional Gold Medal. With many Tibetans undocumented in the city, the women tend to work as babysitters and housekeepers. Ironically, many Tibetan men work in Chinese restaurants! Tibetans hope to advance economically, provide education for their children, and send remittances to their families in India and Nepal. Besides sending money, some Tibetans also send their children to India in order to learn Tibetan language and culture.

How To Pray: Due to the plight of their people, Tibetans are very open and willing to talk to outsiders about their culture and struggles. Pray that God would create opportunities for conversations between Christians and Tibetans that would lead to sharing the gospel. Behind the fade of serenity and peace that often typifies Buddhism, doubts and superstitions prevail. Pray that Tibetans would yearn for the peace that only God can give. Many Tibetans migrated first to India, where there are Christians, and then to the US. Pray for Indian and other South Asian churches in New York to reach out to the Tibetan community.