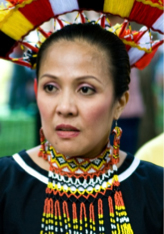 Bio: As far as Metro New York immigrant groups go, the Filipinos are the quintessential chameleons. With the history of the Philippines littered with influence from diverse nations and peoples, its people have been uniquely prepared to adapt, blend, and integrate. Filipino genetics, names, features, culture, and language draw influence from peoples as diverse as Taiwanese aborigines, Indonesians, Malays, Chinese, Indians, Japanese, Spaniards, and Americans. As a result, a Filipina New Yorker is just as comfortable marrying a man from Puerto Rico as she is a man from China. The Filipino ability and willingness to adapt has led to the Philippines, sending its greatest export commodity, its people, all over the world. In 2007, the Philippines was the fourth-largest remittance-receiving country in the world, right behind India, China, and Mexico. At any given time, an equivalent to almost one-fourth of the Philippines' domestic work force is working abroad, which gives the country the honor of having the highest rate of outmigration per population of any country in East or Southeast Asia. With large expatriate communities in places as varied as America, Saudi Arabia, Dubai, Taiwan, Japan, Italy, and Malaysia, Filipinos have had little difficulty adjusting to the fast-paced culture of Metro New York. A now-defunct Filipino radio station estimated their community to number over 300 thousand in Metro New York, while the 2010 American Community Survey estimated 196,524 Filipinos in the Metro area.

When Did They Come to New York? The Philippines was a territory or commonwealth of America from 1898 to 1946. From that time on, Filipinos have migrated to America in various waves. While the sugar fields of Hawaii and the fish canneries of Alaska lured many Filipino immigrants at the beginning of the twentieth century, Metro New York did not receive a large number of Filipino immigrants until 1965 immigration policy changes welcomed skilled workers from a variety of countries. Faced with a nursing shortage, New York hospitals actively recruited Filipinos in the 1970s, 80s, and 90s due to their English ability and education in American-style institutions. In the 1990s, seventy-two percent of Filipinas who came to New York were registered nurses, and Filipinos represented around ten percent of the city's nurses. Once established, these nurses were able to bring their families over on reunification visas. The migration of nurses and their families was augmented by other Filipino professionals, such as physical therapists and computer programmers, making the ever-growing Filipino community the third-largest Asian group in Metro New York today.

Where Do They Live? Like many immigrant groups in the Metro area that are predominantly professionals, Filipinos live in a variety of places. They often choose housing based on proximity to their work, so it is no surprise that Filipino clusters are of ten located near major hospitals. The largest Filipino enclave in the Metro area is in Jersey City around Newark Avenue from JFK Boulevard to Palisade Avenue. The neighboring cluster around Manila Avenue was the original enclave. In Queens, a smaller portal to all things Filipino can be found around 69th Street and Roosevelt Avenue in Woodside.

What Do They Believe? For Filipinos, the Christian church is not simply a spiritual home but a place to ward off loneliness and insecurity and to gain Filipino friends, news, and cultural connection. As a result, religious devotion actually increases in Metro New York among most first-generation Filipinos compared to their homeland. At least eighty percent of Filipinos identify themselves as Catholic, close to ten percent as evangelical Christian, and the rest as Iglesia Ni Cristo (a sect originated in the Philippines), Jehovah's Witness, or other.

What Are Their Lives Like? In the 2000 Census, out of the largest immigrant groups, Filipinos in New York City were by far the wealthiest in terms of household income. They made a whopping $20,500 more a year than the second group (Indians) and made eighty-seven percent more than the city median. Filipino professionals work long hours to make this money but also find time for leisure activities, which include ballroom dancing, gambling, and golf.

How To Pray: Pray that the Filipino church will use their cross-cultural skills in missional endeavors. Pray that Filipino wealth will fuel Kingdom efforts instead of materialism.