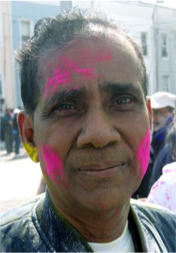 Bio: The earth, sky, and individuals were enshrouded in baby powder and the fluorescent colors of blue, yellow, pink, and purple dyes. Children and adults alike participated as Indo-Caribbeans from Guyana, Trinidad, Suriname, and Jamaica gleefully threw the dyes and powder at each other in a Hindu celebration they call Phagwah (called Holi in Hindi). Taking place at a rather drab-looking park in a drab-looking neighborhood in Queens, the Indo-Caribbeans use the annual event to do what immigrant groups are renowned for doing in New York City, adding color to an otherwise gray palette! The large attendance at the Phagwah event reflects the fact that a significant portion of the Hindu population in Metro New York did not emigrate directly from South Asia but from the Caribbean. In 1838, the first indentured laborers set sail from India to British Guiana (Guyana) in order to work on sugar plantations. These Indian laborers were from the lower and working classes, and migration continued into Guyana, Trinidad, Suriname, and Jamaica up until the 1920s. Today, around fifty percent of Guyana's population and forty percent of Trinidad's have East Indian ancestry. Just as these Indians brought their culture, language, religion, and influence to the Caribbean in the 1800s and early 1900s, up to 300 thousand Indo-Caribbeans are doing the same today in Metro New York.

When Did They Come to New York? When Britain enacted a law in 1962 to restrict unregulated immigration, and the United States conversely opened its doors in 1965 to a wider immigrant pool, Indo-Caribbeans began pouring into New York. Immigration continued to escalate in the 1970s and '80s when the economy and political situation in Guyana worsened under the socialist government of Forbes Burnham. As a result, the majority of Indo-Caribbeans in Metro New York (around seventy percent) are Guyanese.

Where Do They Live? Danny, an Indo-Guyanese who moved to New York over thirty years ago, spoke proudly about the community that Indo-Caribbeans have formed in the Richmond Hill neighborhood of Queens. In an accent tinged with patois, Danny boasts, "Have you been to Liberty Avenue here? Have you been? It has everything! Temples, shops, restaurants, everything! It is like a 'Little Guyana,' you know." While Richmond Hill is their main neighborhood in New York, Indo-Caribbeans can also be found in other Caribbean neighborhoods in Brooklyn, Queens, the Bronx, and New Jersey.

What Do They Believe? When the first East Indians came into the Caribbean in the 1800s, they were almost exclusively Hindu or Muslim. Years of exposure to other religions, most notably Christianity, has altered the religious dynamics of Indo-Caribbeans to a point where no dogmatic claims can be made on what they believe. However, the majority of Indo-Caribbeans are still Hindu (perhaps sixty percent), while Muslims make up about twenty percent, Christians around ten percent, and agnostics and adherents of other religions make up the rest. Sometimes the religious dynamics shift tremendously depending on the country of origin, such as Jamaica, where most Indo-Caribbeans are now Christians.

What Are Their Lives Like? The Indo-Caribbean migration, from its inception in India, has always been a story of working-class people with little opportunity making a way for themselves, despite difficult circumstances and conditions. Their lives in New York are no different. Although Indo-Caribbeans often work at service jobs that pay little and take a lot, their hard work has paid off with neatly kept houses, a neighborhood they call their own, and organizations that sprinkle the year with lively parades, festivities, and events. On the weekends, a unique Indo-Guyanese pastime can be observed at Phil Rizzuto Park in Queens, where morning whistling matches between black finches from Guyana garner reactions from spectators who resemble those at a horse race. The "chirp-offs" are so popular in the local community that finches are even smuggled into the country and sold for up to $1,500.

How To Pray: Pray for the existing Indo-Caribbean churches to continue having an impact on their community, especially through providing opportunities for their people to respond to the gospel. Pray that, with a much higher percentage of Christians than their Punjabi Indian neighbors in Richmond Hill, Indo-Caribbean Christians will take advantage of their unique opportunity to share the gospel with unreached immigrants from their original homeland of India.