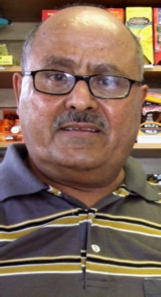 Bio: Standing on the corner of a Harlem intersection, Ali pointed to store after store nearby. "That one is Yemeni-owned," he said, pointing to a small corner deli. "So is that one," pointing to a hardware store. "And that one, and that one," motioning to the small grocery stores on the next corner. "We're all over!" Ali and his fellow Yemenis own an extraordinary number of New York City's independent delis and small grocery stores, also known as bodegas, which offer busy New Yorkers sandwiches, lottery tickets, and cigarettes twenty-four hours a day, seven days a week. Combining their business acumen and strong work ethic, Yemenis have acquired a significant portion of New York City's corner stores. Yemenis hail from Yemen, a country of 23 million and the only republic on the Arabian Peninsula. In 1990, North and South Yemen were united for the first time in centuries, but the unification process was a struggle, and civil war broke out in 1994. The South, which is rich in natural resources and had the support of the Saudi government, demanded independence. The conflict lasted only a few months until the South was defeated, but over seven thousand casualties were claimed. Yemen still faces a strong Southern independence movement and is also troubled by violent Shi'ah rebels in the northern part of the country and an increasing Al-Qaeda presence. Metro New York's Yemeni population of approximately 20 thousand consists of both North and South Yemenis, and while they disagree on Yemeni politics, most are on friendly terms with one another.

When Did They Come to New York? The first Yemenis came in small numbers in the late 1800s, settling alongside early Syrio-Lebanese and Palestinian immigrants. Most Yemenis, though, arrived after 1965, following a "chain migration" pattern by which those already settled would host new arrivals, helping them find housing and work. The 1990s saw a big surge, as many Yemenis lost jobs as a result of the first Gulf War. It is rare to find an entire Yemeni family in Metro New York, as ninety percent of Yemeni immigrants are men who work to support their families back home.

Where Do They Live? "We're everywhere," said Nabil, a young Yemeni man who works in his father's bodega in Brooklyn. "There's really not one spot where we all live, except for Bay Ridge." Bay Ridge, Brooklyn, has the largest Arab-American community in New York City, and Yemenis are part of the mix. Yemenis live and own stores all around the city, mainly in developing neighborhoods within Brooklyn, Queens, and the Bronx, as well as Harlem, where rents are more affordable.

What Do They Believe? In Yemen, over half of the population is Sunni Muslim. The large Shi'ite minority, dominated by the Zaydi Shi'ah sect, is concentrated in North Yemen. Metro New York's Yemeni community consists of both Sunni and Shi'ah, and differing levels of devotion to Islam are often apparent. A walk through a Yemeni bodega speaks volumes about the religious outlook of the owner. Some strictly follow halal regulations, while others sell pork and alcohol products forbidden by Islam. Some Yemenis use their stores as proselytizing venues, posting Muslim prayers and tracts for shoppers to read. Many even have a prayer mat pointed towards Mecca on the floor, so both owners and customers can pray at the appointed times during the day. There are two Yemeni mosques in Brooklyn: one on Atlantic Avenue and the other on 3rd Avenue in Bay Ridge. Currently, there is no known evangelical ministry focused on Yemenis in Metro New York.

What Are Their Lives Like? "A Yemeni man might have an extra five hundred dollars a month, which won't go far to support a family in New York," explained Ali, "but the money is worth a lot in Yemen. The family can live much better." For generations, Yemeni men have been leaving their families and heading to other parts of the world in order to provide for their families. Many look forward to monthly DVDs of family celebrations to keep them connected. While in Metro New York, Yemeni men work hard, typically logging twelve to fifteen hours a day, seven days a week. Many will work for nine to ten months straight and spend the remainder of the year back home in Yemen. Very few plan to stay in the US long term, as most are using their money to build homes and invest in businesses in Yemen.

How To Pray: Yemen is one of the least-evangelized countries in the world, yet Yemenis in Metro New York are very accessible and easy to befriend because their businesses put them in the public eye. Pray that Christians will capitalize on these open doors to reach Yemenis with the gospel.