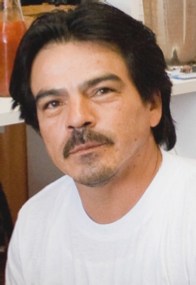 Bio: "Pick me! Pick me!" the men shout at the building contractors circling the Home Depot parking lot in Hempstead, Long Island. Because of their limited English and undocumented status, working as day laborers is one of the few ways Salvadoran immigrants can earn money. When the economy was booming, they were picked every day and made up to $800 a week. Now they are lucky to get a couple of work days per week. Most of the money goes to family in El Salvador. In 2008, $3.8 billion was sent, the highest amount ever recorded. While the Long Island suburbs may seem like an unusual place to find a community of 100 thousand Salvadorans, Hempstead became a magnet for them in the 1980s, mainly because rural Salvadorans preferred it to the city and it offered an abundance of service jobs. However, life in the suburbs has not been easy. Anti-immigrant sentiment is prevalent, and there is significant racial conflict. With the US economy faltering, stress and difficulties have only increased for the "suburban" Salvadorans.

When Did They Come to New York? A large amount of Salvadorans began arriving in Metro New York in 1980 with the start of El Salvador's civil war. Since US policy did not allow them to enter legally, they came secretly. Most of the early arrivals were men fleeing the death squads. After they were legalized by the 1986 Amnesty Act, they brought their families. With El Salvador's economy still struggling, thousands of people risk entering the US illegally for the chance to earn money to support their families back home.

Where Do They Live? Long Island has the largest concentration of Salvadorans in Metro New York. This is unique, because the vast majority bypassed the city, the typical entry place for immigrants, to settle in the suburbs. Hempstead, in Nassau County, is Metro New York's "Little El Salvador." Salvadoran businesses line Franklin Avenue in Hempstead and Suffolk Avenue in nearby Brentwood in Suffolk County. Union City and West New York in New Jersey form the second largest community in the New York Metro area, with an estimated 20,000 Salvadorans clustered around Bergenline Avenue. Smaller numbers have assimilated into other Latino neighborhoods, such as Washington Heights and East New York, Brooklyn.

What Do They Believe? "People are searching for something different when they come here," said David, a longtime Salvadoran resident of Brentwood. El Salvador, named for "Christ the Savior," has historically been a Catholic country. Today, evangelicals are a third of the population. In Metro New York, an estimated seventy-five percent of Salvadorans are Catholic and five percent, evangelical. Most Catholics attend Mass regularly, but as David suggested, coming to the US breaks the connection for many. Some tension exists between the two groups. One Catholic ministry leader said she wished for "a van to pick people up for church like the Pentecostals." Evangelical leaders suggest there are thirty to forty churches in Metro New York, mainly Pentecostal, where Salvadoran evangelicals worship.

What Are Their Lives Like? "Potentially, there could be a lot of homeless in this community, but no," said one local church leader. "Salvadorans take care of each other, even when it is inconvenient for them." Salvadorans are known for being hardworking, reserved people, whose lives revolve around their community. Typically, several families will share one house together, while single men will crowd into an apartment, working and sleeping in shifts. Because so many Salvadorans are undocumented, they are often suspicious of outsiders. Gangs, led by former Salvadoran militia leaders, have become a problem on Long Island, as they aggressively recruit high school students and start violent turf wars in the neighborhoods.

How To Pray: Salvadorans have basic needs such as learning English and finding work. Pray that Christians will join outreach ministries to help, build friendships, and share the love of Christ. Many Salvadorans associate immigration with starting a new life. Pray that those who do not know Christ would start a new life with Him.