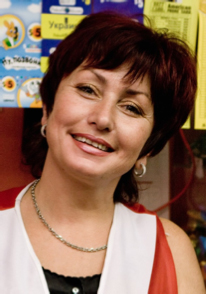 Bio: A local New Yorker gargled out questions to a Russian dentist as she worked on his teeth in a Harlem dentistry. "So, you don't live in Brooklyn?" he managed to mutter in response to her saying she first lived in Manhattan and now New Jersey. "Absolutely not!" she claimed, "Those Russians are trying to live in the past. They never get out and experience New York." The dentist's comments allude to the conflicting identities experienced by Russians in New York today. Coming off a heavy dose of communism, the new Russian immigrants have been uniquely positioned to form new identities in their adopted city. As a result, they have splintered into groups defined by being more Jewish, more Russian, more American, more Orthodox Christian, more atheist, more sophisticated, or even more open to other religions like evangelical Christianity. While religious identity has been muddled by the effects of communism, an estimated seventy to ninety percent of all Russians in New York City are ethnically Jews. Without including Russian-speaking people from other former Soviet republics, there are around 110 thousand Russians in the New York Metro area.

When Did They Come to New York? Even though Russians have been immigrating to New York City since the 1800s, it is the large influx of immigrants in the last few decades that has made the word "Russian" synonymous with certain parts of New York City. In the 1970s, many Soviet Jews were allowed to leave their country for Israel. This opened the way for many to come to America as well. More recently, policy changes under Mikhail Gorbachev allowed Russians to more freely leave the country and, in 1989, the United States Congress designated Soviet Jews as eligible to receive refugee status if they could prove they had a credible fear of persecution. As a result, the 1990s witnessed an influx of more Soviet Jews to New York City than any other immigrant group. While economics was the main motivation for migration, religious persecution in Russia provided strong motivation as well.

Where Do They Live? Unlike the Harlem dentist who sees herself on the "more sophisticated" side of Russian identity, sixty-two percent of Russians in New York City live in Brooklyn (ACS 2008). In particular, the south Brooklyn neighborhoods of Brighton Beach, Bath Beach, Gravesend, Sheepshead Bay, Bensonhurst, Starrett City, and Midwood have a strong Russian flavor.

What Do They Believe? Periodically along streets in Jewish neighborhoods in Brooklyn, plastered signs appear that appeal to the Orthodox Jewish community to save their Russian Jewish brothers from being swept away by Christian missionaries in Jewish disguise. According to a 2000 survey of Russian-speakers in New York, forty-one percent identify their religion as Judaism within their first three years in America, but this increases to sixty-four percent for those who have been in America nine years or more. Having lived under a communist system that suppressed belief in God for decades, many Russian Jews in New York have awakened their faith by becoming members of Orthodox synagogues. However, as the Brooklyn signs indicate, a growing minority have converted to evangelical Christianity. At least ten percent of Russians in Metro New York belong to the Russian Orthodox Church.

What Are Their Lives Like? If one were to stroll down Brighton Beach Avenue in winter, one would notice an abundance of women extravagantly promenading in fur coats. Russians love fashion, classical music, plays, ballroom dancing, and the sophisticated lifestyle. While some have realistically entered that world, for others it is a false veneer that hides the psychological trauma of adjusting to America and being a highly educated professional forced to work a lower-level job.

How To Pray: Pray for the continued success of evangelical church plants focused on reaching Russian Jews and that Russian Christians would have confidence in Christ in the midst of persecution. Russians have one of the highest suicide rates in the city. Pray that they would find hope, worth, and meaning in Christ.