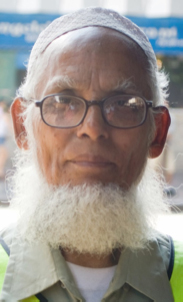 Bio: No immigrant enclave in Metro New York was affected by the aftermath of 9/11 as much as "Little Pakistan" in Midwood, Brooklyn. In the months following the terrorist attacks, enough Pakistanis became victims of verbal and, sometimes, physical abuse that a deep fear swept over the community. In the weeks following 9/11, federal agents stormed Pakistani apartments in Brooklyn and detained hundreds of people. In the fall of 2002, as part of the war on terrorism, the federal government required non-American citizens from twenty-five countries (twenty-four of which were primarily Muslim) to report to the Immigration and Naturalization Service (INS) for "special registration." Those who complied were fingerprinted, photographed, and interrogated. Although many of these immigrants had lived peacefully in the country for years, around sixteen percent were put into deportation proceedings after reporting to the INS, which only increased the fears in the Pakistani community. Over a two-year period, the thriving Pakistani enclave changed drastically. According to Moe Razvi, the director of the Council of Peoples Organization, established to assist the Pakistani community in the aftermath of 9/11, thirty of the 150 Pakistani-owned shops in Little Pakistan have shut down since 9/11. Conservative estimates claim that 15 thousand Pakistanis left the neighborhood to return to Pakistan or seek refuge in Canada or Western Europe. Pakistanis living elsewhere in Metro New York stopped frequenting Little Pakistan for fear of being deported, and others, especially the younger generation, started changing their appearance to look "more American." The turbulence seems to have finally dissipated, and the Pakistani population has leveled off at an estimated 120 thousand in Metro New York, fifty percent of which are Punjabi, thirty percent Muhajir, and the rest Pathan, Balochi, and Sindhi.

When Did They Come to New York? A large emigration from Pakistan to New York City began in the late 1960s primarily among the middle- and upper-class professionals of Karachi and Lahore, most of whom were Punjabi or Muhajir (Urdu speakers who migrated to Pakistan after its independence in 1947), as well as from the Mirpur District of Kashmir. These immigrants were followed by their often lower-class family members and less-urbanized compatriots, including other Punjabis, Pathans, Sindhis, and Balochis. Up until 9/11, Pakistanis were one of the fastest-growing immigrant groups in the city.

Where Do They Live? Even though it seems sedate compared to pre-9/11, the area around Coney Island Avenue between Avenue I and Foster Avenue in Brooklyn still hosts the largest Pakistani population in the Metro area. However, concentrations exist throughout Metro New York where Pakistanis almost fully occupy some apartment complexes in places like Jackson Heights, Queens, and Jersey City.

What Do They Believe? Pakistan itself is the second-largest Muslim country in the world. In the words of one New York cabbie, "All Pakistanis here are Muslim. Eighty percent are Sunni and twenty percent are Shi'ah." While these numbers are consistent with other community estimates, there are around ten Pakistani-Punjabi churches in Metro New York with around six hundred members, but there are only a handful of Muslim-background Christians in these churches. There are also a small number of Ahmadis, who follow a sect that claims to be Muslim but has been rejected as such by orthodox Muslims.

What Are Their Lives Like? As the first Pakistani immigrants were largely urban professionals with English skills, the Pakistani community has continued to have many professionals. However, the most visible Pakistanis in the city are those working time-intensive, exhausting jobs, such as those in construction, street vending, owning small businesses, and taxi driving. In the aftermath of 9/11, divisions have accelerated between the first and second generations, with many young Pakistanis eagerly desiring to assimilate. Still, various Pakistani languages such as Punjabi, Potwari (closely related to Punjabi and spoken by Mirpuris), Urdu, Balochi, and Sindhi can be heard among the second generation.

How To Pray: Although several efforts have been made, there are still no churches in Metro New York made of Pakistani Christians from a Muslim background. Pray for a breakthrough in Pakistanisâ€™ response to the gospel.