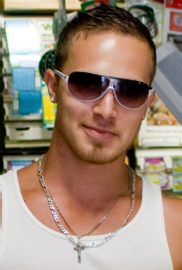 Bio: When immigrants in Metro New York are discussed, New York City seems to receive all the attention. However, there are some immigrant groups that practically shun the city to build their ethnic enclaves elsewhere. For instance, the Salvadoran enclave is in Long Island; the Peruvian, Turkish, and main Arab enclaves are in Paterson, New Jersey; and the Ironbound District of Newark has long been host to the "Little Portugal" of Metro New York. Along Ferry Street in North Ironbound, Portuguese restaurants, cafes, bakeries, and other stores are thriving. Even when Newark has suffered economically, the Iron-bound section has hardly been affected due to the bustling Portuguese businesses. Within a decade of the first Portuguese immigrants arriving in the 1910s, the Ironbound District had a large enough Portuguese population to form its first social club. The Sport Club Portuguese, formed in 1920, served as a precursor to the dozens of social organizations now in existence that cater to the Portuguese community. The 2010 American Community Survey estimates that there are 147,401 people with Portuguese ancestry and 56,140 Portugal-born in the New York Metro area. Over one-third of those born in Portugal live in the Newark area, and fewer than five percent live in New York City itself. The Portuguese community estimates their population to be around 150 thousand in the Metro area.

When Did They Come to New York? Portuguese have a long history of emigration. They have emigrated for centuries to Brazil and their colonies in Africa and, in the late eighteenth and early nineteenth centuries, mainly left the Azores (Portuguese islands in the Atlantic) to work on whaling ships in Massachusetts, California, and Hawaii. The large Portuguese immigration wave to New York, however, mainly occurred after America changed visa policies in 1965. Under the dictatorship of Antonio de Oliveira Salazar, the country's poor became poorer and, after Salazar's death in 1970, the country experienced high inflation, economic turmoil, and high emigration. While the Portuguese government stabilized in the mid-1970s, the negative economic repercussions were felt into the early-1980s. During this period, many poor people from around Murtosa and elsewhere emigrated out of Portugal into Newark. After Portugal joined the European Economic Community in 1986, immigration to Metro New York subsided tremendously.

Where Do They Live? The Ironbound District of Newark undoubtedly remains the center of Portuguese activity in Metro New York. However, a Portuguese presence also exists in Mineola, Long Island, and parts of Westchester County.

What Do They Believe? With four Portuguese Masses and one English Mass on Sunday, as well as a bilingual Mass on Saturday, Our Lady of Fatima Catholic Church in Newark reflects the strong Portuguese devotion to Catholicism. Built in the 1950s as the first Catholic church in Newark devoted to the Portuguese community, it has been joined by several others in the last few decades. Around ninety-five percent of the Portuguese identify themselves as Catholic, while up to five percent are Protestant. However, there are hardly any Protestant churches that have a predominantly Portuguese congregation.

What Are Their Lives Like? From Magellan to the whaling industry in New Bedford, Massachusetts, Portuguese success has long been linked to the sea. In Metro New York, though, the Portuguese have had to branch out into other industries such as carpentry, construction, and the restaurant and bakery businesses to be successful. Mainly coming from the peasant class, the Portuguese are less organized, educated, political, and professionally ambitious than some other immigrant groups. Nevertheless, they have built and sustained a successful community in Newark, and the Ironside seafood industry they have specialized in has kept them anchored to their maritime roots.

How To Pray: Pray that churches will be started that focus on reaching Portuguese people and culture, as almost all Portuguese evangelical churches in Metro New York are predominantly Brazilian.