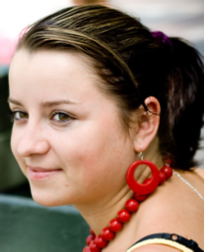 Bio: Bernadette shared her story with some wistfulness. Several years ago, she abandoned an exciting career as a chef in Poland to be a maid in Greenpoint, Brooklyn. She did it for one reason: to make more money to support her family back in Poland. Such stories are common in Greenpoint, home to Metro New York's largest Polish community, where a walk down Manhattan Avenue looks and sounds like a city in Poland. Signs for stores and offices, and most of the conversations, are in Polish. Over one million people claim Polish ancestry in Metro New York, with Greenpoint and a few other enclaves in northern New Jersey serving as centers of Polish identity and culture (ACS 2010). For generations, these communities were energized by a continual flow of young, hard-working immigrants seeking a better life in America. Today, they are at a crossroads. Poland's entry into the European Union means younger Poles have more opportunities at home or in neighboring countries. The effects are already tangible, many of Greenpoint's Polish stores have closed. LOT, the largest Polish airline, now sells many one-way tickets from New York to Poland. Without fresh immigration, Metro New York's Polish communities will likely lose their distinct ethnic composition and fade away.

When Did They Come to New York? Major waves of Polish immigrants came to the US between 1860 and 1920. Called za chlebem, which means "for bread," they congregated in industrial centers, including New York, to find work and created the ethnic enclaves that exist today. Thousands more sought freedom here after World War II and during the Soviet Era. With the fall of communism, a fresh wave of young people seeking economic opportunities swelled the ranks of Polish communities throughout the 1990s.

Where Do They Live? With its distinctly Polish flavor, Greenpoint has long been Metro New York's "Little Polonia." Polish businesses, professional offices, and restaurants dominate Manhattan and Nassau Avenues against the backdrop of the soaring steeple of St. Stanislaus Kostka Roman Catholic Church. Skyrocketing real estate prices have driven many into more affordable communities in Staten Island and Queens. (One Polish Catholic parish in Staten Island doubled in size over the past several years.) Across the Hudson River in northern New Jersey are several large Polish communities, including Wallington, where 51.5 percent of residents claim Polish ancestry. After Chicago, Metro New York has the largest Polish population in the US.

What Do They Believe? "You believe in the cross, and I believe in the cross. That is all that matters," was Bernadette's take on the differences between Catholics and Protestants. Whether most Poles would agree with her is another story. Approximately eighty percent of Poles in Metro New York are Roman Catholics, and Catholicism is deeply intertwined with their ethnic identity. Church is a huge part of their lives, and tension exists between Catholics and the small evangelical community, who are accused of "abandoning the faith of their fathers." Nevertheless, Metro New York has at least four Polish evangelical churches, including Baptist, Assemblies of God, and Methodist.

What Are Their Lives Like? For most Poles in Metro New York, life centers on church, work, and family. Known for their strong work ethic, they are no strangers to hard work and long days. For generations, Polish immigrants have lived sacrificially, saving their money to send back to Poland. Among the most recent wave of immigrants are the wakacjusze, or vacationers, who come to the US on visitors, visas and work without documentation, intending to save money and return home. As life in Poland improves, this group is dwindling. One of the more remarkable trends is that of established immigrants, including educated professionals, business owners, and retirees, who are pulling up stakes and returning to Poland. For guidance, they can find two bestsellers in Greenpoint bookstores: Returning to Poland and Retirement of a Re-Immigrant in Poland.

How To Pray: The Poles are very devout people who will openly talk about their faith. Pray for opportunities to discuss biblical Christianity and what it means to have a relationship with Jesus Christ.