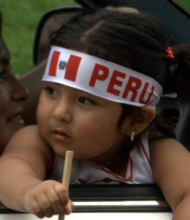 Bio: "Have you ever eaten Peruvian food?" a Peruvian man living in Paterson, New Jersey, asked, "It is the best in the world. The best in the world! The only food that can compare is French. I am telling you, they say that French cuisine is good, but Peruvian is the best in the world!" How many casual diners would list Peruvian food among their top ten favorite ethnic cuisines? Nevertheless, the seemingly hyperbolic claims of this Peruvian man are not unfounded. For the gastronomically informed, Peruvian food is indeed considered in the top tier of its class. With influences from the Inca, Spanish, African slaves, and immigrants from China, Japan, and Italy, Peruvians mastered the art of fusion cuisine long before it was featured in haute cuisine restaurants across Metro New York. Today, Peruvian food is being recognized even more around the city, as restaurants are frequently opened by constituents of the most concentrated Peruvian population outside of Peru. Community estimates place their population around 200 thousand in Metro New York, while the 2010 American Community Survey estimates around 169 thousand in the same area.

When Did They Come to New York? At the turn of the twentieth century, Paterson, New Jersey had established itself as America's "Silk City," and had expanded its textile production to Lima, Peru. This relationship fostered a slow immigration of working-class Peruvian families to Paterson, creating a beach-head for later Peruvian immigrants. Immigration increased gradually throughout the century until the 1970s when economic conditions and political turmoil in Peru sparked a large influx of the Peruvian middle class, including many doctors and engineers. Conditions worsened in the 1980s, as inflation rose to over two thousand percent and political violence was rampant. A 1989 TIME Magazine article claimed, "On an average day in Peru, six people die by political violence. One day it is a government agent organizing peasant cooperatives. One day it is a ruling-party mayor. One day it is a government-aligned journalist. Most days it is peasants who get in the way." With the country in disarray, the working class immigrated in large numbers to places like Paterson and Jackson Heights, doubling Metro New York's Peruvian population in the 1980s and then again in the decade that followed. With the Peruvian economy becoming more stabilized in the twenty-first century, immigration has slowed, yet Metro New York's Peruvian population has continued to increase.

Where Do They Live? The Peruvians are one of the few ethnic groups in Metro New York that have never had their main immigration area located in New York City. Instead, this honor belongs to Paterson, New Jersey, an industrial city that Peruvians have been immigrating to for over a century. The site of the Peruvian Annual Parade is not Madison Avenue; it is Main Street in Paterson. The location of the Consulate General of Peru is not the Upper East Side; it is Paterson, and if one wants to journey to "Little Lima," it can only be found on western Market Street in downtown Paterson. While New Jersey is host to over fifty percent of the Peruvians in Metro New York, New York City has a smaller concentration of Peruvians along Roosevelt Avenue in Jackson Heights, Queens.

What Do They Believe? Over ninety percent of Peruvians claim to be Catholic, and Catholic churches play a central role in helping Peruvian immigrants adjust to America by providing social and religious services, a place to socialize with other Peruvians, and a link to their lives back home. One such connection is a large street celebration held every October that celebrates the symbolic Seor de los Milagros (Lord of Miracles), a mural of Jesus that survived a devastating earthquake in Peru.

What Are Their Lives Like? Like their predecessors nearly a century before, many Peruvian men and women find work in the textile industry or other factories in the Paterson area. However, as Peruvians have become more established, they are opening more restaurants, travel agencies, and retail stores.

How To Pray: There is a large movement in America of Hispanics adopting the evangelical faith. Pray that Peruvians in Metro New York would do the same. Pray that the Lord of Miracles celebration would glorify Jesus Himself and not the mural.