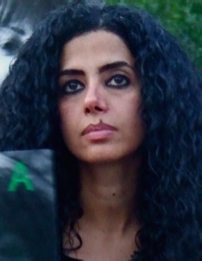 Bio: "When I first came here, I worked at a gas station. A man from Mexico asked me where I was from. When I said 'Iran,' he began yelling, 'Terrorista! Terrorista!' I was so embarrassed." Houshmand, a young Iranian man, shuddered as he related the story. Many Iranians in Metro New York have experienced similar humiliation. Although proud of their heritage, Iran was the heart of the ancient Persian Empire that once controlled territory from North Africa to India, the Iran of today is a cause of sadness and frustration. Fifty years ago, Iran was a secular country and a strong ally of the US. In 1979, Iran's authoritarian Shah was ousted, and the fundamentalist Shi'ite Islamic cleric Ayatollah Khomeini took control, instituting Islamic religious rule. In November 1979, Iranian students seized the US embassy in Tehran, holding fifty-two staff hostage for fifteen months. Since then, the relationship between the US and Iran has been antagonistic, leaving Iranians in the US with the difficult task of forging an identity that values their culture while disassociating themselves from the negative image of their homeland. Metro New York is home to an estimated 30,989 people with Iranian ancestry (ACS 2008), even though community members suggest 60 thousand to 70 thousand is a more accurate number.

When Did They Come to New York? While small numbers of Iranian students and professionals came to the US in the 1950s and '60s, most left Iran just prior to and after the Islamic Revolution of 1979. The earliest wave, supporters of the Shah who were wealthy and highly educated cultural Muslims, began arriving in 1977. They were followed by large groups of religious minorities, Jews, Christians, Baha'is and Zoroastrians, who feared persecution by the Islamic Republic. Of those, only Persian Jews settled in significant numbers in Metro New York. Still more fled the devastating Iran-Iraq War (1980- 1988). Iranians have arrived steadily since 1979 although it is more difficult to leave Iran now.

Where Do They Live? "My father read that Nutley, New Jersey, was one of the safest communities in America. So that's where we moved!" said Farah, whose family came in the late 1970s. Apart from the prominent Persian-Jewish community in Great Neck, Long Island, locating Iranians in Metro New York is difficult. Most speak English well, and they do not cluster in groups, preferring instead to assimilate in affluent suburbs populated by professionals with good schools for their children.

What Do They Believe? "Right now, it seems Iranians are tiring of religion due to the situation in Iran. Many are rejecting all religion and faith in God," explained Bijan,* an Iranian-American who leads a ministry to Muslims in Metro New York. "Iranians are much like other well-educated, successful professionals," he continued. "Many feel they don't have time for God, they are chasing after money and material things." While Iranian Muslims are not especially devout, they tend to cling to Islamic traditions and holidays as part of their cultural identity. "They are like your Christmas and Easter Christians," explained one young man. In contrast, California's Iranians seem to shed their Islamic identity more easily, and many are turning to Christianity, leading Christian missions experts to hail them as a "budding missional force of Muslim-background believers." As of now, there is one Farsi-language church in Metro New York with approximately thirty Iranian Christians who are involved in evangelism among their Muslim compatriots.

What Are Their Lives Like? "There are two essential values embedded in all Iranians: tarof and respect," Salman, a college student, explained. Tarof is a uniquely Persian social ritual in which offers of hospitality are meant to be refused. "It compels Iranians to fight over who pays for dinner," he continued. "It means you invite people to stay in your home, but they are expected to decline." Since Iranians prize material success, they tend to push their children into prestigious and lucrative professions such as medicine, law, and engineering, described by one young Iranian as the "Holy Trifecta" of careers.

How To Pray: Pray for the spiritual health and outreach of the Farsi-speaking church, as it is one of only a few churches in Metro New York with membership primarily made of Muslim-background believers. Iran is one of the top three countries where Muslims are coming to Christ, and Christianity is exploding among Iranians in California. Pray for this movement of the Spirit in Metro New York.