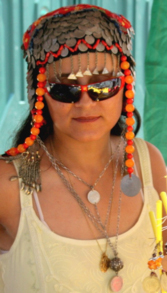 Bio: "After September eleventh, my neighbor told me he wouldn't be coming to my carwash anymore," shared Sam, a Palestinian man who has lived in Paterson, New Jersey, for twenty-five years. "He said he didn't want to funnel money to terrorists." Living under suspicion compounds the Palestinians anguish about losing their homeland in 1948 and being forced to live in militarized zones where their freedoms are restricted and violence is a part of life. Because Palestinians in the US watch events in the West Bank and Gaza in real-time on satellite TV and talk with relatives there regularly, they identify with the oppression and violence. They want justice to be autonomous people with their own land. Community leaders estimate there are 30 thousand Palestinians in the New York Metro area. Here they face intrinsic tensions: They came to the US for a better life, yet the US has historically supported Israel (their enemy). New York City is where their "oppressors" have achieved power, wealth, and success. Nevertheless, Palestinians have a voice here. They are not afraid to demand justice for their people, as evidenced by the January 2009 Times Square march protesting Israel's attacks on Gaza.

When Did They Come to New York? Palestinian Christians first came to New York City in the 1880s, with small numbers of refugees arriving after the 1948 war. The majority of Palestinian immigrants in the New York Metro area "predominantly Muslims" came after 1967, peaking in the 1990s. Most came to make a better life for their families and to escape the violence and lack of opportunities in the West Bank. The tightened immigration policy following the 9/11 attacks has greatly reduced Palestinian entry into the United States.

Where Do They Live? A significant Palestinian community lives in the Paterson, New Jersey area with businesses concentrated downtown along the intersection of Main and George Streets. The Bay Ridge area of Brooklyn between 4th and 8th Avenues and 60th and 80th Streets also hosts a large community, with their businesses located along 5th Avenue and Ovington. While the younger population prefers the excitement of Brooklyn, families are beginning to move to the northeast New Brighton area of Staten Island where they have established businesses around northern Bay Street.

What Do They Believe? An estimated ninety-five percent of the Palestinian population in Metro New York is Sunni Muslim, and the remaining five percent, Christian. Their first allegiance, however, is typically to their Palestinian identity. Palestinians worship alongside other Muslims; they do not have their own worship centers. Palestinian Muslims claim to be very accepting of all faith communities, as they just want to "live in peace with everyone." Most Palestinian Christians are Orthodox and worship at Arabic-speaking churches, such as Saint Nicholas Antiochian Orthodox Cathedral of Brooklyn.

What Are Their Lives Like? Standing outside of his bagel shop in Staten Island, Freddy, an immigrant from Gaza exclaimed, "It is sad that kids have to come in here asking to know the truth. They should be able to get this through American media, but they don't." During and after the Israeli-Gaza conflict in 2009, Palestinians longed for their voice to be heard, and the plight of their people constantly occupies their thoughts and activities. Many still send financial support to relatives in the Middle East and visit as often as possible. With Palestinians holding conservative and traditional family values, young adults typically seek Palestinian spouses approved by their parents, and their weddings function as significant community events. Palestinians are very hospitable and are especially open to talking to outsiders when they can express their political views to, in their own words, "spread the truth." As one Palestinian man in New Jersey claimed, "Al-Jazeera is far better than other television networks because they put everything live, no fake news."

How To Pray: Palestinians feel oppressed and ignored by the world; they see political justice as their only hope for a better life. Pray that their minds and hearts would be opened to the true God of Abraham, who grants genuine hope and lasting peace through Christ. Palestinians long to be heard. Pray that Christians would listen to and befriend them.