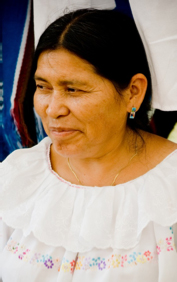 Bio: Sharing Times Square street space with the likes of the The Naked Cowboy and subway musician space with the likes of musical saw players, Quichua musicians have established themselves as part of New Yorks tourist trade with their popular Andean folk music. The Quichua, or Quechua, Indians from the Andes Mountains in South America are the largest remaining American Indian group in the world. Hailing from mountain ranges throughout Ecuador, Bolivia, Peru, Argentina, Chile, and Colombia, the Quechuan language and identity spread due to the influence of the Quechua-speaking Inca Empire. It was the Incas who brought Peruvian populations into Ecuador to consolidate their territory, making Quechua the language of government and trade. Although Quechua is still spoken throughout the Andes, some dialects are no longer mutually comprehensible, such as the one spoken in Ecuador where Quichua is the preferred spelling and the one spoken in Peru. In Metro New York, most Quichua are from either the Otavalo or Caari highlands of Ecuador. Community leaders estimate that there are ten thousand Quichua in Metro New York, with most of these Caari. Anthropologist Jason Pribilsky, who wrote an ethnography on Andean Ecuadorian immigration to New York, estimates that there are 1,500 Quichua in Rockland County alone.

When Did They Come to New York? Quichua from Otavalo started making their way to New York in the late 1970s and early '80s due to economic problems in their homeland. Initially, they primarily sold textiles their people had made in Ecuador and were involved in other small commercial activities between the two countries. The population has grown steadily until today, when most Otavalo Quichua immigrate and specialize in a particular construction industry, such as siding, roofing, or cement. Shortly after the Otavalo Quichua carved a niche for themselves in the New York economy, Quichua from the Ecuadorian provinces of Caar and Chimborazo immigrated and followed suit in the construction business.

Where Do They Live? The main concentration of the Quichua is in the Jackson Heights, Corona, and Ridgewood areas of Queens. With little free time apart from work, however, new Quichua communities have developed throughout the Metro area as they settle close to their work sites. They can be found along Westchester Avenue in the Morrisania area of the Bronx, Newark, New Jersey, and north of New York City in Rockland County particularly in Spring Valley.

What Do They Believe? Quichua people almost exclusively identify themselves as Christians. Most of these, however, are Catholics who have syncretized traditional Inca beliefs and rituals with Catholicism. Many Quichua have a strong sense of the reality of the supernatural world and believe that what occurs in that dimension explains what happens in the natural world. At least eight evangelical Quichua churches exist in Metro New York. These churches are often extensions of existing churches in Ecuador, whose members have immigrated in large numbers.

What Are Their Lives Like? Apart from the obvious economic reasons, many Quichua and other Ecuadorians immigrate to New York for what it represents. Using their own colloquialism, they seek to adopt the iony way. Iony, derived from the ubiquitous phrase, NY has come to represent a way that is more modern, progressive, and developed. The iony way can be used to describe anything from fashion to evolved attitudes on gender equality, and many Quichua begin to adopt the iony lifestyle. With male immigrants often leaving their families behind in their home countries, the acute changes that take place in both locations at the hands of iony have had both positive and negative effects. While both sides are often excited about the progress their family is making because of iony, the same force is usually responsible for tearing apart marriages, customs, and traditional values.

How To Pray: There are several Quichua evangelical churches in Metro New York. Pray that God would use them to prevent their people from falling prey to the negatives aspects of the iony way. The Quichua are often looked down upon by Hispanics from Central and South America. Pray that the Quichua would love these people with a Christ-like love, persuading them to investigate the Source of such humility.