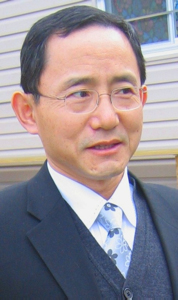 Bio: Armed with tracts and cassette tapes of her pastorâ€™s sermons, Young* plunged into conversation with the man at the next table at the busy Koryodang Bakery on Northern Boulevard in Flushing. "Jesus died for your sins," she told him. He didn't say much but nodded repeatedly and accepted a tape and schedule of church events. When the conversation ended, she announced, "He promised to come to church." Young's encounter with her fellow bakery customer exemplifies a defining characteristic of the Korean immigrant culture, an incomparable evangelistic zeal. In fact, it is impossible to understand Korean immigrants apart from their Christian identity. While only twenty-nine percent of Korea's population is Christian, a remarkable seventy-five percent of Koreans in the US are Christians, and the vast majority are evangelical Protestants. The New York Metro area is home to over 220 thousand Koreans (ACS 2010) and has over one thousand Korean churches, ranging from house churches, to small congregations that rent space from other churches, to churches with multi-million dollar budgets and facilities. Korean Christians have established dozens of religious organizations and theological schools in Metro New York that teach Christians how to evangelize and prepare for missionary work. Korean churches also play a vital role in the community; their weekly activities include not only worship services and prayer meetings but also music programs for kids, activities for senior citizens, and ESL classes for new immigrants.

When Did They Come to New York? Koreans started arriving in large numbers in the late 1970s. The 1990s saw the biggest influx, with Metro New York's Korean population growing by thirty percent. Most are from areas around Seoul, and a top reason for emigrating is to provide good education for their children. With many children coming to America with their parents, a large group of 1.5 generation Korean-Americans has developed with its feet in both cultures. Nearly eight out of ten Korean-Americans in Metro New York are immigrants.

Where Do They Live? Once limited to Koreatown in downtown Flushing, Korean shops and restaurants are now fixtures on the main streets of many Metro New York suburbs. Since 2000, one-third of Flushing's Koreans have moved out, primarily to find better schools for their children. In Douglaston, Queens, Koreans are the fastest-growing ethnic group, while Palisades Park, New Jersey, has the highest concentration of Koreans (thirty-six percent) of any community in the US. Korean churches can now be found throughout Metro New York from Westbury, Long Island, to Norwood, New Jersey.

What Do They Believe? Known for all-night prayer vigils, month-long fasts, and a passion for missions, the Korean church is not for wimps. However, concerns about a growing "silent exit" from church among the 1.5 and second generations have motivated leaders to let younger Korean-Americans put their own stamp on church, whether it means using English or including hip-hop routines during worship. While evangelicals dominate in numbers, Korean Catholics, although just a fraction of Christians in Metro New York, are also very devout and active. Small numbers of Buddhists and a few syncretistic religious groups are also found in Metro New York's Korean communities.

What Are Their Lives Like? No Saturday morning cartoon watching for Korean kids! Most spend Saturdays at a hagwon, a "cram school" (sometimes run by churches) designed to get them into prestigious high schools, Ivy League colleges, and eventually a lucrative career. Korean parents work long hours to provide opportunities for their children. In return, they expect children to honor them by fulfilling their own view of success. Nevertheless, the children often adopt American individualism, which leads to family conflict over weighty issues such as the meaning of success and Christianity.

How To Pray: Pray for God to continue to bless the prayers and evangelistic efforts of Koreans who seek to bring the gospel to the lost in their communities and around the world. Although the first generation has much zeal, they have trouble relating to others cross-culturally. Pray that the 1.5 and second generations will take the missionary baton from their parents and run with it.