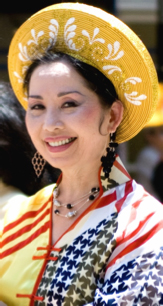 Bio: After the United States realized that a decisive victory over North Vietnam in the Vietnam War would not be imminent, they began withdrawing troops and turning the war over to the South Vietnamese. Although the number of their artillery, tanks, and armored cars was far greater than their communist enemies', the South Vietnamese were easily defeated in 1975, and a mass exodus from the country took place. As a result, Vietnamese refugees and immigrants have become the largest Southeast Asian group represented in the United States. Metro New York is usually not a prime destination for refugee settlements, as refugees are typically placed in areas with a surplus of cheap housing stock. However, circumstances in Jersey City and the Bronx were favorable to the Vietnamese, and the Vietnamese soon established a sizeable community in Metro New York, which now numbers over 38 thousand (ACS 2010). As they still bear the scars of years of fighting, bloodshed, displacement, and loss, the Vietnamese community has struggled to form a cohesive identity, with ethnic, class, and religious differences still in play. The most obvious distinction is that between the ethnic Vietnamese and ethnic Chinese from Vietnam. The latter make up a significant portion of the Vietnamese community in Metro New York, and they have settled alongside the large Chinese population in the city.

When Did They Come to New York? Before 1975, there were hardly any Vietnamese in Metro New York. However, as the war situation became bleak in 1975, a US company began relocating their Vietnamese employees to Jersey City. When Saigon fell later that year, the first large wave of Vietnamese emigration ensued, with some joining the new community in Jersey City. This group consisted largely of educated urbanites with American connections, and many were Catholic. The second wave of Vietnamese immigrants, known as "boat people," started coming in the late 1970s and consisted primarily of less-educated farmers, fishermen, and coastal people with access to escape boats. At the same time, Vietnam and China went to war, causing anti-Chinese sentiment to escalate. As a result, many of the emigrants during this time were of Chinese extraction, usually either Teochew or Cantonese, even though they spoke Vietnamese fluently. These "boat people" had to live in refugee camps in Southeast Asia before being resettled in the United States, and sometimes their stay in the camps lasted up to fifteen years. In response to international pressure, the Vietnamese government facilitated emigration from Vietnam under the Orderly Departure Program, which legally brought tens of thousands of Vietnamese refugees to America throughout the 1980s and '90s. While emigration continues from Vietnam in a variety of ways, Metro New York's Vietnamese population is also increasing due to internal immigration from elsewhere in the US.

Where Do They Live? Jersey City and the area around University Avenue and Fordham Road in the Bronx were the first Vietnamese settlements in Metro New York, but the largest concentration today is found in Queens, particularly in Flushing, Elmhurst, and Jackson Heights. Although scattered "Saigon" or "Vietnamese" store sightings abound, there is no obvious Vietnamese enclave in the city.

What Are Their Lives Like? Thirty percent of Vietnamese in New York City live in poverty, and twenty-seven percent are at risk for depression. Many Vietnamese, however, seek to erase the memories of the past through hard work. While there are many professionals, Vietnamese have found job niches at smoothie carts and Vietnamese restaurants. In fact, Vietnamese sandwiches (bÃ¡nh mÃ¬) are becoming mainstream city fare.

How To Pray: The Christian church has played a prominent role in caring for Vietnamese refugees. Pray that God's love through His people will draw many Vietnamese to become followers of Christ.