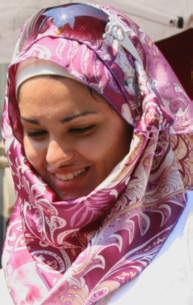 Bio: "Back in the seventies and eighties, deciding to come to America was easy," explained Mr. Haddad, a former leader of the Arab-American Foundation who has lived in Metro New York for over thirty years. "In Jordan, we were making five thousand dollars a year. If we went to America, we'd make fifty thousand." Today, however, it is a different story. Despite its limited natural resources, Jordan's economy has grown over the past decade, which has reduced the economic incentive to emigrate. Since educated Jordanians are now able to find well-paying jobs at home, emigration from Jordan has slowed considerably. As Mr. Haddad points out, "No one is going to leave for an extra thirty dollars a week!" Situated on the East Bank of the Jordan River across from Israel, Jordan is a young country although its land has been inhabited for thousands of years by such peoples as the Canaanites, Edomites, and Moabites. Jordan was under Ottoman rule for centuries and was then controlled by the British after World War I. Two years after gaining independence in 1946, Jordan seized the West Bank from Israel. The West Bank was recaptured by Israel in the Six Days War of 1967, and in 1988, Jordan formally renounced all claims to the West Bank. Metro New York's Jordanian-Arab community numbers approximately 12 thousand people, even though the number of actual immigrants from Jordan is much greater. Because Jordan is home to nearly two million Palestinian refugees, many Palestinians enter the US carrying Jordanian passports.

When Did They Come to New York? Compared to their Syrio-Lebanese neighbors, Jordanians are newcomers to Metro New York. The first significant numbers arrived in the 1950s, with the largest waves in the 1970s and '80s. As Mr. Haddad pointed out, most came for better jobs and higher salaries. Jordanians have the distinction of being one of the few Arab groups who have immigrated as whole families.

Where Do They Live? The city of Yonkers in Westchester County, just north of New York City, has been drawing Jordanians since the 1950s. Many were employed by the Stewart Stamping Company, which operated a factory in Yonkers from the 1940s until 2008. Today, Jordanians are concentrated in the neighborhoods of Park Hill, Dunwoodie Heights, Lowerre, and Lincoln. Smaller numbers also live in the large Arab community in Bay Ridge, Brooklyn. Some third and fourth-generation Jordanians have moved to other areas of Westchester but maintain strong ties to Yonkers.

What Do They Believe? "Whatever you call yourself, Catholic, Baptist, Jehovah's Witness, it doesn't matter as long as you believe Jesus is the Son of God," Mr. Haddad stated. He believes the Jordanian community in Metro New York is approximately seventy percent Christian and thirty percent Muslim, a very different breakdown than in Jordan. Largely due to immigration to the US and Europe, Jordan's Christian population has steadily decreased from an estimated thirty percent in 1950 (which included the West Bank) to less than four percent today. Metro New York's Jordanian Christians are primarily from the Roman Catholic and Melkite (Greek Catholic) traditions. In Yonkers, the Church of the Immaculate Conception of St. Mary, known to locals as St. Mary's, has an Arabic Mass for Roman Catholics; Melkites worship at Christ the Savior Church. Yonkers is home to several mosques where Jordanian Muslims worship along with the Andalusia School, a private Islamic school founded in 2004.

What Are Their Lives Like? "Our churches hold us together," explained Mr. Haddad, speaking for the Christians, "and the Muslims have their mosques." While some first-generation Jordanians live in Metro New York, many families are into their third and fourth generations, and most have fully assimilated. "Like other groups in America, we've adapted," claimed Mr. Haddad. "Later generations only know a little about Jordan. They're Americans now." While Jordanians continue to own shops, delis, and businesses in Yonkers, many are professionals such as doctors, lawyers, and engineers. Education is a high priority, and the vast majority of young people attend college.

How To Pray: The Gospels show that part of John the Baptist's ministry took place in Jordan, and he baptized his disciples in the Jordan River. Pray that Jordanian Christians would build upon their strong Christian heritage and increase their zeal to proclaim Christâ€”especially to their Muslim neighbors.