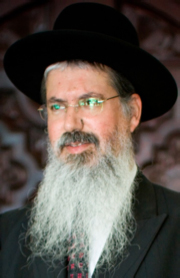 Bio: "We hate the word 'melting pot," Aron Aronov claimed, reflecting on his people's disposition regarding American assimilation. Aronov, who is often called the Mayor of Queensistan, has received the unusual moniker because of his arduous activism for preserving the culture, language, and heritage of his people, the Bukharan Jews, who have migrated en masse to Queens from Uzbekistan, Tajikistan, Kazakhstan, and Kyrgyzstan. The Bukharan Jews, also known as Bukharian and Bukharic Jews, are believed to be descendants of Israelites who were exiled to Babylonia in 586 BC. Having later come under the influence of the Persians, Bukharan Jews today speak a language called Bukhori, which is similar to Tajik Persian, with a trace of Hebrew and Russian. For over two thousand years, Bukharan Jews were one of the most isolated Jewish groups in the world. Eventually settling in the region of Bukhara in Central Asia due to, among other reasons, commercial opportunities along the Silk Road, Jews from this region came to be known as "Bukharan Jews." While only a few hundred are left in Central Asia today, an estimated 50 thousand now call Metro New York home, making it the largest concentration of Bukharan Jews in the world and home to one-fourth of the world's Bukharan Jewish population.

When Did They Come to New York? The biblical exile led the Bukharan Jews to settle along the great commercial route called the Silk Road; the new exile has led them to one of the greatest commercial centers in the world, New York City. The immigration primarily started in the 1960s, and the first Bukharan Jewish synagogue in Queens was founded in 1965. Bukharan Jewish immigration continued sporadically until the disintegration of the Soviet Union. In newly formed countries such as Uzbekistan and Tajikistan, increased nationalism, xenophobia, and Islamic fundamentalism led to a mass exodus throughout the 1990s of most Bukharan Jews still in Central Asia. During the different waves of immigration to New York, some Bukharan Jews came directly from Central Asia, while others came via Israel.

What Do They Believe? Now that freedom to practice their religion has been realized, many Bukharan Jews have used the opportunity not only to embrace their distinct religious identity but also to gain knowledge of Orthodox traditions normally associated with the Ashkenazi branch of Judaism. As the Bukharan Jewish community's chief rabbi explains, "About twenty percent of the community are Orthodox, sixty percent are traditional but not necessarily observant, and twenty percent are unaffiliated." Despite the influence of Ashkenazi Orthodoxy in Queens, Bukharans (while being Mizrahi like many other Jews from Central Asia) still practice Sephardic Judaism. Most Bukharan Jews are very superstitious and do not question their rabbis, which is one reason why their distinct religious rites and customs have been preserved. Although evangelistic Bible studies are occurring with Bukharan Jews, some of whom have become believers; there is still no Bukharan Christian church or messianic synagogue in Metro New York.

What Are Their Lives Like? Almost nightly, the Bukharan restaurants in Queens convert into party halls, usually celebrating someone's birthday, wedding, bar mitzvah, or a Jewish holiday. If a Bukharan family is wealthy enough, these parties take place in their large mansions, which house multiple generations of families under one roof. While the Bukharan community has its share of unemployed people with limited English skills, a super-wealthy class has emerged as well, primarily from working in the jewelry industry.

How To Pray: Although Queens is the most strategic place in the world to share the gospel with Bukharan Jews, there are only a couple of workers among them. Pray that God would send laborers. Pray for the first church or messianic synagogue to be started among the Bukharan Jews.