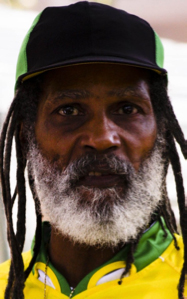 Bio: "He is the King of Kings, Lord of Lords, and Conquering Lion of Judah." Christians around the world immediately identify this title with Jesus. Among Jamaicans, however, entitlement to these words is equally claimed by the Rastafari movement in reference to former Ethiopian leader, Haile Selassie I. While Christians make up a majority of the Jamaican population in Metro New York, Rastafaris, or Rastas, have a strong voice and presence in the Jamaican community, especially considering that those who follow the Rastafari religion make up less than ten percent of the population. The Rastafari movement began in Jamaica in the 1930s, building upon Africa-influenced religions, Marcus Garvey's "Back to Africa" campaign, and a general disgruntlement with Western oppression. When Ras Tafari Makonnen was crowned emperor of Ethiopia, a country known for resisting Western colonization, he took the title "Haile Selassie I," meaning "Might of the Trinity." Rastafaris believed (and still believe) that Haile Selassie I was God incarnate, and they adopted the Ethiopian ruler's original name as their own. A variety of cultural, social, political, and religious ideologies converged, and soon Rastas gained a large following with their opposition to Babylon (the West) and an apocalyptic cause to repatriate the black diaspora to Zion (Ethiopia). While the Rastafari movement is a religion, its influence extends much more broadly. Reggae music popularized by Bob Marley, dread-locks and baggy clothes, ritual smoking of ganja (marijuana), and resistance to oppression are elements of Rastafari that have extended beyond religion into a cultural movement with followers all over the world. Although Rastas often decry the materialism of Babylon, many have opted not to "repatriate" to Zion yet and have settled in New York instead, a city so materialistic that Christians of an apocalyptic bent have labeled it "Babylon" themselves! Jamaicans are the third-largest foreign-born group in New York City, and people of Jamaican ancestry number close to 360 thousand in the Metro area (ACS 2010).

When Did They Come to New York? Jamaicans led the Caribbean migration to New York throughout the twentieth century, including an initial wave in the first two decades, a small wave from the late 1930s to the early 60s, especially after World War II, and a large surge from the late 1960s to the present. An estimated fifteen percent of Jamaica's population left the country in the 1970s and 1980s, prompted by a failing economy. In the past couple of decades, Jamaica has become notorious for crime and gangs, inciting others to emigrate for safety reasons. Women are usually the first to migrate, and there are fifty-six Jamaican women for every forty-four Jamaican men in the US (Census 2000).

Where Do They Live? There are three main concentrations of Jamaicans in Metro New York. Apart from the West Indian mecca of East Flatbush and Crown Heights in Brooklyn, Jamaicans have spread out to the Laurelton-Rosedale area of Queens and have a large concentration in the northern tip of the Bronx in the working-class neighborhoods of Eastchester, Wakefield, and Baychester.

What Do They Believe? On New York subways on Sunday mornings, it is common to see small groups of Jamaican women wearing colorful hats and conversing about "living for God" on their way to church. Indeed, Jamaicans, as well as other Caribbeans, have infused their evangelistic zeal into the city, reviving "black churches" and others throughout the Metro area. Most Jamaicans adhere to Christianity, with Pentecostal, Baptist, Anglican, and Seventh-day Adventist denominations among the most popular. Although Haile Selassie I "disappeared" in 1975, Rastafaris still worship him as God and King. Other Afrocentric religions such as Pocomania have a small following.

What Are Their Lives Like? Jamaicans have a reputation for being strong, confident, and hard-working. Many professionals and intellectuals immigrated to New York because they could not find work in Jamaica commensurate with their education. However, Jamaicans in Metro New York are primarily working-class people who socialize in their own networks, through which their native tongue of Patois can flow freely.

How To Pray: Rastafarians have muddled the identity of Christ by claiming that Haile Selassie I was a second incarnation of Jesus. Rastas refer to the Bible regularly, especially Old Testament passages about exodus and restoration, and their congregations hold regular Bible studies. Pray that God would use the Scriptures to point Rastas to a correct understanding of Christ and His Second Coming.