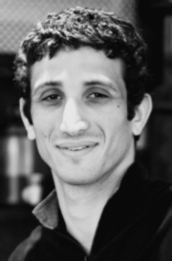 Bio: They are the paradoxical exiles. For all the politics. All the fighting. All the migration. All the pride. All the money spent to form, establish, and solidify Israel. For all the effort it took to bring the exiles back into "the promised land," the people were not supposed to leave so willingly. Yet, despite the chagrin of their compatriots, Israelis have flooded into the New York Metro area for decades. Among the Zionists they are labeled yordim, meaning they have descended or gone down, as opposed to the olim, who have ascended or gone up by immigrating to Israel. Despite the stigma, around 200 thousand Israeli immigrants as diverse as Israel itself now call Metro New York their temporary home. They are religious and secular, young and old, Jewish and Arab, Ashkenazi and Sephardic, and even Zionist and anti-Zionist. Despite their differences, many Israelis plan on one day returning to the land they call home.

When Did They Come to New York? Israelis have been making their way to New York City, the neo-promised land for Jews, from the moment the nation of Israel began. The 1950s and early '60s witnessed a steady wave of Israelis drawn to the economic and educational opportunities America had to offer, not to mention the much more stable political environment. The pull of safety in New York spiked immigration in the 1970s due to the uncertainty and fear that swept over many Israelis in the aftermath of the 1973 Yom Kippur War. From the 1980s into the twenty-first century, a large contingent of educated young people found skilled employment in Israel lacking, and packed their bags for the opportunities and adventure of New York. The stream of young Israelis into New York, many right out of the army, continues to this day.

Where Do They Live? For Israelis, New York is a tale of two cities. Slip into Borough Park, Brooklyn, for a meander down 13th Avenue, and one can peek into the world of Orthodox Jews (many from Israel), whose lives are governed by a strict observance of the Judaic laws. On the other hand, head down to the clubs in Manhattan's Meatpacking District late one Friday, and it would not be unusual to find a staggering tribe of young Israelis. Of course, everything in between exists as well.

What Do They Believe? A slight majority of Israeli Jews in New York claim that their Jewish identity is more cultural and ethnic than religious. However, it is not uncommon for them to participate in religious festivities from time to time, even though this is also interpreted as identifying culturally with their people. Judaism, in all its various forms, is practiced faithfully by many of the other Israeli Jews, and some actually find their religious experience heightened in America as a defense against the secularizing influence of the city. The few Arab Israelis in New York are almost all Muslim.

What Are Their Lives Like? The diversity of Israelis becomes very evident when looking at their assortment of settlements in the Metro area. Those with a more Orthodox bent often settle among other Orthodox Jews in Borough Park or Williamsburg in Brooklyn, or even the Hasidic enclave of Monsey in Rockland County. The seaside communities of Georgetown in Brooklyn and Woodmere in Queens have a concentrated Israeli population, as do the suburban areas of New Springville, Staten Island, and Fair Lawn, New Jersey. Nevertheless, the most noticeable "Little Israel" in New York today are along Main Street in Kew Gardens Hills, Queens, and St. Marks Place in Manhattan's East Village, which has developed into a haven for the younger Israelis flocking into the city.

How To Pray: There are no known church planters specifically focused on reaching the Israelis, and there is no primarily Israeli church known to exist in New York City either. Pray for laborers. Many young Israelis have come to New York City on a search, be it for money, education, or adventure. Pray that their search would end and then begin anew, in Jesus the Messiah.