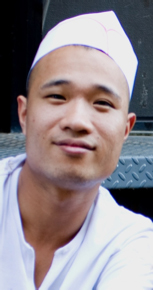 Bio: New York City is a place that unapologetically changes, evolves, and rebuilds. Historical buildings are torn down to make room for new developments, and ethnicities or races that have a sense of ownership over certain neighborhoods suddenly find themselves pushed out by economic or social factors. Since its inception in the late 1800s, Manhattan's Chinatown has "belonged" to the Cantonese, especially those from the Pearl River Delta in mainland China's Guangdong Province. As the size of Chinatown increased throughout the twentieth century, the City of New York primarily let Chinatown govern itself. An umbrella organization, the Chinese Consolidated Benevolent Association (CCBA), served in this capacity, with its president often referred to as the "Mayor of Chinatown." Furthermore, almost all Chinese joined associations, usually along family or provincial lines, that helped its members by providing jobs and social services. Those that did not have strong provincial or family ties formed associations called tongs, many of which date from the first Chinese immigrations in the late nineteenth century. Some of the tongs eventually became very powerful by gaining control of illicit businesses and enforcing their will through gangs, battling each other over territory and power and forcing almost all Chinese to pay for their "protective" services. With an influx of new immigrants from other parts of China at the end of the twentieth century, the power of both the CCBA and tongs has subsided, and the city has started providing more social services and law enforcement in Chinatown. Many first-generation mainland Cantonese have passed away, and their descendants often choose to move away from the ethnic enclave. Although Cantonese is not the only Chinese language spoken in New York anymore, a large portion of the over 677 thousand Chinese in Metro New York (ACS 2010) traces its roots back to Guangdong Province's Pearl River Delta.

When Did They Come to New York? Retreating from civil war and responding to California's Gold Rush, thousands of Chinese from the Pearl River Delta, particularly Taishan, started leaving the coast of Guangdong Province and arriving in America in 1849. Taishanese people were contracted to mine for minerals and build railroads before industry changes and the Chinese Exclusion Act of 1882 largely confined them to the Chinatown ghettos of cities like San Francisco and New York. With the US allowing only a limited number of Chinese into the country until 1965, the Taishanese and to a lesser extent other Cantonese dominated Chinese life in Metro New York until 1965. At that point, new immigrants from Guangdong were allowed to reunite with their family members, but other Chinese also made their way to New York, including a large number of Cantonese from Hong Kong. Over the last couple of decades, emigration from Guangdong has diminished, and second and third-generation Cantonese often prefer an American or Chinese-American identity over their "rural" Taishan roots.

Where Do They Live? While the second and third generations have scattered throughout Metro New York, first-generation mainland Cantonese, many of whom are elderly, still exist in Manhattan's Chinatown as well as its "extension" in Brooklyn's Sunset Park and the large Chinatown in Flushing, Queens.

What Do They Believe? Although the Cantonese could be labeled nonreligious since they rarely attend places of worship, they are, in fact, pragmatically religious by seeking a balance in life through ritual. Like most Chinese in America, Cantonese religious life mainly involves ancestor veneration. Rituals done before Buddhist or ancestor shrines in homes, businesses, or temples are more an act of appeasement than worship. During interviews, Chinese pastors claimed that less than five percent of mainland Cantonese are evangelical Christian although the percentage is higher among the second and third generations.

What Are Their Lives Like? As the elder statesmen of the Chinese in Metro New York, the Cantonese have paved the way for others. By establishing job niches in laundries, restaurants, and garment work, the Cantonese created a path to success in America that required little English! Their ability to buy homes has led many away from the ethnic enclave although many return on weekends to visit and shop.

How To Pray: The mainland Cantonese are generally less religious and more secular in outlook than other Chinese people. However, many second and third-generation Chinese are becoming Christians. Pray that these generations would be able to show honor to their parents while also lovingly pointing them to the honor that can be bestowed on humanity only through faith in Jesus Christ.