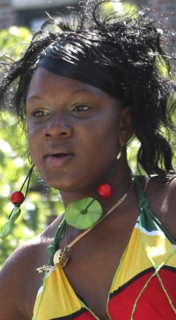 Bio: In 1492, Christopher Columbus set sail to discover a westward route to "India," which would currently be identified as Asia. Upon the discovery of what is now the Bahamas, Columbus believed that he had reached the islands of the Indies. Instead, he had discovered a "New World," and this discovery launched a centuries-long battle of conquest and colonization by Western powers. Even though Columbus falsely labeled his discovery, the Caribbean became popularly known as the West Indies, and the original inhabitants of the new world as Indians, names that have remained until today. Whereas Guyana is located in South America on the northern coast, its people and culture are closely related to that of the English-speaking Caribbean islands. The Dutch were the first to colonize Guyana, but Britain gained firm control in 1814. After African slaves were granted freedom in 1834, the British recruited East Indians to work as indentured servants on their plantations. Instead of returning to India after a few years work, many stayed, and Guyana's population now has more people of East Indian descent than African. In Metro New York, over 174 thousand people were born in Guyana (ACS 2008), and forty-three percent of these identify themselves as "black or African-American" (Census 2000). Afro-Guyanese are usually equally conversant in English and Guyanese Creole.

When Did They Come to New York? Afro-Guyanese migrated to Metro New York throughout the twentieth century, but the 1950s and '60s saw the first large waves. Responding to a labor shortage among health care workers and maids and nannies in New York, Afro-Guyanese women were often the first to arrive. Once they were established, they made arrangements for their families to join them. When Guyana transitioned to a socialist government in the 1970s, unemployment and inflation skyrocketed, prompting the largest wave of Afro-Guyanese migration, which peaked in the 1980s. Immigration has lessened since but still remains steady. Today, the Guyanese population in Metro New York is about one-quarter the size of its population in Guyana, and New York City's Guyanese population is only slightly less than Georgetown's, the capital and largest city in Guyana.

Where Do They Live? While Indo-Guyanese have established an enclave in Richmond Hill, Queens, the Afro-Guyanese prefer to settle in the neighborhoods east of Prospect Park in Brooklyn among other Caribbean people of African descent.

What Do They Believe? "Oh, everyone is Christian," Grace claimed, discussing the Afro-Guyanese after a lively worship service in East Flatbush, Brooklyn. "A lot of people are Pentecostal, Anglican, Lutheran, Methodist, and Catholic. I haven't lived in Guyana in many years, but if things are the same, I would guess that around half the people that went to church in Guyana do here." When the Guyanese population exploded in the 1970s, they brought their faith with them, and many started independent churches throughout the city. Churches of a Pentecostal variety are among the most prevalent, and Lutherans are very active, even having a well-organized local ministry called MAG (Ministry Among Guyanese). Around ten to fifteen percent of the Afro-Guyanese have an affiliation with the Catholic Church, while almost all the rest have at least a nominal Protestant identity.

What Are Their Lives Like? Discussing the customs of the Afro-Guyanese, Grace perked up when describing the kwe-kwe, a unique Guyanese celebration that takes place the night before a wedding. "All the family on both sides are there and there is plenty of food and drink," she explains. "It lasts late in the night, and they play games. It is like a bachelor and bachelorette party put together!" While these celebrations offer an occasional respite, most Afro-Guyanese spend long hours at work as nurses, nannies, teachers, security guards, shop owners, and construction workers. They usually marry other Guyanese or English-speaking Caribbeans.

How To Pray: Afro-Guyanese Christians are very active in their communities, and their churches are active in promoting social justice and meeting the needs of the poor. Pray that God would use these Christians to spread the "abundant life" in Christ throughout Brooklyn and the rest of the Metro area.