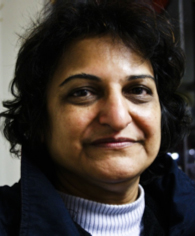 Bio: Mr. Patel proudly showed off the well-appointed rooms in his newest hotel in Brooklyn. Offering views of the Manhattan skyline and the Statue of Liberty, rooms cost as much as $350 per night. This luxury boutique hotel in upscale Park Slope is a far cry from the ubiquitous "Patel motels" that offer discount lodging for weary travelers along America's highways. Patels,"Patel" is the most common surname among Indians from the state of Gujarat, have come to dominate the US hospitality industry. Gujaratis now own forty- two percent of hotel properties in the US, worth a combined $40 billion. An estimated twenty percent of Indians in Metro New York, around 110 thousand people, are Gujaratis, and the majority are Hindu. Along with Punjabi Sikhs and Keralite Christians, they make up the bulk of the Asian-Indian population, which is now the second-largest Asian ethnic group in Metro New York. Coming to the US with high levels of education, a strong work ethic, and entrepreneurial spirit, Indians have made a significant impact. Physicians of Indian origin compose the largest immigrant group in the US medical community, accounting for one in every twenty practicing doctors. Indian immigrants have become CEOs of corporations such as PepsiCo and Citigroup, while others have expanded small businesses into thriving enterprises like the Patel Brothers grocery chain, a Gujarati-owned business with forty-one stores across the US. However, the stereotype that all Indians are well-educated high achievers is inaccurate, as more recent arrivals come from diverse socioeconomic backgrounds, and many struggle to make a living.

When Did They Come to New York? The first Gujaratis in Metro New York were students and professionals who came in the 1960s. The 1970s and '80s drew a large influx of professionals and business people who had the education, money, and connections to find jobs or set up businesses. Between family reunifications, business visas, and student visas, Indians have been one of the fastest-growing immigrant groups in Metro New York over the last few decades.

Where Do They Live? "People in Gujarat Province may not know where Kennedy Airport is, but they know Oak Tree Road in Edison!" said a local pastor whose church hosts an ESL ministry for Gujaratis. Edison, New Jersey, has become the "Little India" of Metro New York and has the highest concentration of Gujaratis of any community in the country. In fact, it is hard to find a non-Indian business on Oak Tree Road. While Queens was the first stop for Gujaratis, most wanted to own homes, so they moved to the suburbs as soon they had enough money. Seventy-fourth Street in Jackson Heights, Queens, continues to be a thriving Indian commercial center with many Gujarati-owned businesses.

What Do They Believe? Haana, who works for a Gujarati newspaper in New Jersey, was adamant. "God is one god, and all religions worship him," she said, echoing a pluralistic theme commonly voiced by Hindus. Most Hindus claim to believe in one Supreme Being who is worshipped by different names and incarnations, often represented by idols. Ninety percent of Gujaratis are Hindus. The most influential sect is the BAPS Swaminarayan Sanstha, founded in Gujarat in the nineteenth century. Approximately twenty percent of Gujaratis in Metro New York belong to BAPS, which has become the leading institution for preserving Gujarati culture and language abroad. For this reason, many new immigrants are drawn to BAPS, even those who were not followers back home. A devout population of Muslim Gujaratis live in Metro New York and worship alongside other South Asian Muslims. Gujarati Christians are a small minority, and most come from Christian families in India.

What Are Their Lives Like? "In some ways we are an endangered culture," explained Mr. Patel. "Our children are losing their grip on it, and Gujaratis in India are becoming westernized faster than we are here." Hoping to prevent extinction, Gujaratis work hard to stay connected and preserve their culture. Hindus, Muslims, and Christians each have numerous associations that host activities throughout the year to celebrate their cultures, strengthen their connections, and pass traditions on to their children.

How To Pray: The Gujaratis represent one of the most compelling church planting needs in Metro New York. Pray for God's power to break down spiritual barriers that keep Hindus and Muslims from accepting the truth of Christ's sacrificial love, which has redeemed humankind from eternal darkness.