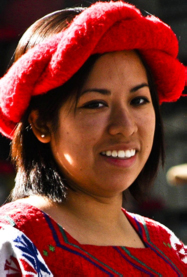 Bio: "Since Guatemalans are so spread out, we have to go to them," explained Rosa Maria, the Guatemalan Consul General. "Eight years ago we started the Consaldo Movil [Mobile Consulate]," she continued. "One weekend a month, we travel to a Guatemalan community, offering our services in churches and schools. We recently saw one thousand people in one day!" While official data suggests Metro New York's Guatemalan population is approximately 131 thousand (ACS 2008), community leaders believe it could be up to three times higher, as many are undocumented. Guatemala has a very diverse population, with the largest concentration of indigenous people in Central America, mostly descended from the Mayan Indians. There are twenty-one ethnic subgroups among the Mayan population, each with its own language. Metro New York has become home to many of these groups, collectively called Amerindians, as well as mestizo Guatemalans, who have mixed Amerindian and Spanish ancestry. The Amerindians suffered profoundly during Guatemala's long civil war (1960-1996), which pitted the government and wealthy landowners against middle-class activists and rural Amerindians. Over four hundred massacres of Amerindians were documented, with tens of thousands murdered and hundreds of villages destroyed. As a result of the war, Guatemala is extremely poor, with over 50 percent of the total population and seventy-five percent of Amerindians living in poverty.

When Did They Come to New York? Throughout the first part of the war during the 1960s and '70s, small numbers of middle-class activists, targeted by the Guatemalan government, began arriving. As attacks against Amerindians intensified during the 1980s, thousands fled to the US although they were never granted refugee status. Guatemalans have arrived steadily since the 1980s, mostly to escape the civil war and chronic poverty.

Where Do They Live? While Guatemalans are spread across Metro New York, they have settled in distinct ethnic communities based on where they came from in Guatemala. "New Jersey's Guatemalans are mainly Amerindians from rural areas in the north and west of Guatemala. Brooklyn, Queens, Connecticut, and Westchester have more mestizo people from the cities and suburbs in the south and east," explained Rosita, president of a Guatemalan cultural association. Mestizo Guatemalans in Brooklyn and Queens typically blend in with other Central Americans while the Amerindians in New Jersey, many of whom do not speak Spanish, are more isolated.

What Do They Believe? Like many of its Central American neighbors, Guatemala is a historically Catholic country that has experienced a dramatic explosion of evangelical Christianity in the last twenty years. Guatemala's evangelical population is now around forty percent. Community leaders suggest sixty to seventy percent of Guatemalans in Metro New York are Catholics and thirty to forty percent are evangelicals, with mestizo and Amerindian evangelical percentages roughly the same. Despite the growing number of evangelicals, Catholic roots run very deep. Every year, Guatemalans at Presentation of the Blessed Virgin Mary Church in Jamaica, Queens, hold a procession venerating a replica of the "Black Christ of Esquipulas," a four-hundred-year-old statue of Jesus, believed to have healing powers. The Archbishop of Guatemala City has come to officiate, and St. Patrick's Cathedral has hosted masses honoring the Black Christ.

What Are Their Lives Like? "Many Guatemalans would like to return home, but so much has changed, it would be too hard. It's really just a dream," said Rosita. Life is challenging for Guatemalans in Metro New York. Many are separated from family, and they work long hours at low-wage jobs. Most have limited education and English skills, making it difficult to find better-paying work. The majority of Amerindians are non-literate and twenty-seven percent speak no Spanish, although some say this helps them learn English more quickly than those who can fall back on Spanish! The goal for most is to earn as much as they can to send back home. In 2008, $4 billion in remittances was sent by Guatemalans in the US.

How To Pray: As evidenced by the Guatemalan devotion to the "Black Christ," Christianity for many is simply an expedient measure to obtain personal blessing. Pray that Guatemalans would realize that true blessing in Christ comes not from the fulfillment of self-centered desires but God's.