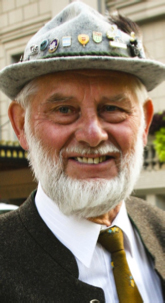 Bio: On a sunny Wednesday in June 1904, 1,300 church members of St. Mark's Evangelical Lutheran Church in Manhattan's Little Germany, mostly mothers and children, boarded the steamship The General Slocum to travel to their annual Sunday school picnic. Forty minutes into the trip, fire broke out, and the ship burned to the water line. Just over one thousand were killed. It was the deadliest disaster in New York City's history until the 9/11 terrorist attacks on the World Trade Center, and it devastated New York's German community. At the time, many believed New York to be the third-largest German-speaking city in the world after Berlin and Vienna. Following the disaster, shattered families fled the German enclave on the Lower East Side, trying to escape sad memories. In the next few decades, the role of Germany in the two World Wars and the Holocaust brought further pain and shame upon German-Americans. Although Metro New York has the largest concentration of people of German descent in the US, currently estimated to be 1.8 million (ACS 2010), the German population has steadily declined as few newcomers arrive and the older generation passes away. Between 2000 and 2008, the number of German-born residents decreased by 17,500. Pastor Muenich, who recently retired from a German Lutheran church in Manhattan, saw this firsthand. "In the 1990s, we had fifty to sixty people coming to our German services. It shrank to only ten to fifteen in the last few years," he explained.

When Did They Come to New York? Germans have been coming to Metro New York since colonial times. Those who died on The General Slocum were part of the massive influx of nearly six million Germans who arrived in the US between 1820 and 1920. The last major wave was in the 1950s and '60s, when over 750 thousand came to the US to escape bleak post-war Germany. With Germany's current prosperity, few are immigrating to the US although thousands come on temporary work assignments with German or multinational corporations.

Where Do They Live? It is difficult to find a German enclave in Metro New York today, as most Germans are fully assimilated. After their exit from the Lower East Side following The General Slocum disaster, many Germans settled along 2nd Avenue in Yorkville on the Upper East Side. Others migrated out to Ridgewood, Queens, joining a large community of Germans who worked in Brooklyn's breweries. Around the same time, German Jews left the ghettos of the Lower East Side for Washington Heights. Ridgewood soon became the new German center of Metro New York, remaining seventy percent German until the 1960s. Today, Gerritsen Beach in Brooklyn and White Plains in Westchester, home to the German School of New York, have small concentrations of Germans.

What Do They Believe? "In the past, going to church and believing in God was just second nature for Germans," explained Pastor Wasserman, who serves one of the remaining German Lutheran churches in New York. "But younger Germans are very secular and materialistic, they have no need for church in their lives." Since the Reformation, the German population has been evenly divided between Protestants and Catholics, plus a small Jewish minority, but Pastor Muenich believes one-third of Germans in Metro New York today adhere to no religion. A few churches hold German services and reach out to the German community, including St. Joseph's Roman Catholic Church in Yorkville and the German Evangelical Lutheran Church of St. Paul on West 22nd Street.

What Are Their Lives Like? Most New Yorkers know at least one German word, "Oktoberfest!", the annual celebration of German food, beer, and music. Metro New York still has dozens of German cultural clubs, even though many are fading from lack of interest. "Germans who came in the fifties and sixties really needed these clubs to stay connected. The younger generations don't need it as much," said Pastor Wasserman. Fewer families enroll children in German language and dance classes, and most of these activities are viewed as recreational rather than intense training in language and culture.

How To Pray: Although Germans such as Martin Luther played a pivotal role in restablishing biblical Christianity, Germans today are disassociating themselves from the Christian faith. Pray that the spirit of the Reformation would be rekindled and draw many Germans back to Christ.