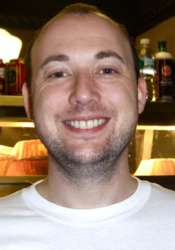 Bio: "When we move here, we basically blend in. But we stand out, we're proud to be British!" explained Nicky, the owner of three very successful British businesses on Greenwich Avenue in Manhattan's West Village. Her shops are among the few places in Metro New York to find a proper English tea (the meal eaten in late afternoon, not the beverage) or a good fish and chips dinner. Despite the support of six thousand residents, Virgin Atlantic Airways, and New York-based British celebrities, a campaign to officially name the block "Little Britain" failed to convince a Manhattan Community Board in 2007. The reason cited by board members? "There's nothing specifically British about that block. There's no significant congregation of British people," they said. While it is ironic that the British, who live in a city named after their own royalty, were denied a small street sign denoting their presence, it was hard to argue otherwise. Over 1 million people in Metro New York claim British ancestry, but only a portion of these have a distinct British identity, and there is no stretch of land in Metro New York that can accurately be called "Little Britain." The British people hail from what is officially called the United Kingdom of Great Britain and Northern Ireland, composed of England, Scotland, Wales, and Northern Ireland. While all are British citizens, growing nationalism in recent years means that more people choose to identify themselves as English, Scottish, Welsh, or Irish, trend confirmed by responses to ancestry surveys in the US. Community leaders suggest Metro New York is home to 100 thousand British.

When Did They Come to New York? With little resistance, the British navy took control of New Amsterdam from the Dutch in 1664, renaming it New York after the Duke of York, who later became King James II. British settlers arrived soon after. The British controlled New York City during the American Revolution, making it a refuge for colonists remaining loyal to the British Crown. Although a small number of British loyalists left after the war, the majority of the British stayed and transferred their allegiance to the new nation. Throughout the nineteenth century, a steady number of British immigrated but were greatly outpaced by other Europeans. From 1920-1969, the United Kingdom never filled its immigration quota, but many of those who did immigrate to the US were highly educated and skilled professionals. The most recent immigration wave began in the 1990s with many drawn by jobs in the fashion industry, the banking and financial sector, or with British multinational corporations.

Where Do They Live? The year 1783, before British loyalists and military had left, was likely the last time a large group of British citizens was concentrated anywhere in Metro New York! Today's British immigrants settle in communities reflective of their demographic identity rather than their ethnic identity. Artists and young professionals tend to live in urban neighborhoods such as the West Village. Those with families usually prefer the suburbs. Kearny, New Jersey, still bears the legacy of British ancestors who worked in a local thread mill in the early 1900s, including a store selling kilts and bagpipes, a fish and chips shop, and a strong tradition of producing top soccer players.

What Do They Believe? "Perhaps ninety-seven percent are nonreligious," John, the director of St. George's Society, surmised. While Britain was once a leading Christian nation with a huge missionary force, the British no longer have a religious identity. Older people are the most likely to belong to a church, usually Episcopal (if English), Presbyterian (if Scottish), or Catholic. The trendy "New Atheism" promoted by British authors such as Richard Dawkins has capitalized on the corrosion of Britain's Christian heritage.

What Are Their Lives Like? "It's 8 AM in New York. Beer and breakfast are on the table and football [soccer] or rugby is live on satellite TV!' That is how John described the scene in some New York sports bars frequented by the British. While the British are quite assimilated, sports draw them together. "Most are happy living in Metro New York," said John. "I've never met anyone who says it's horrible!'

How To Pray: Living in Metro New York, the British are exposed to a far more religious culture than at home. Pray that they would explore and experience biblical Christianity in this new context.