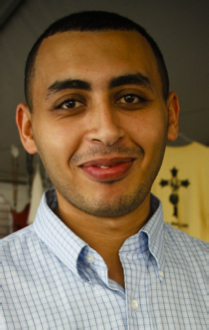 Bio: When centuries-rooted animosity underlies interethnic relations, common nationality and immigrant status may enable newfound affinity. But even one tragic event can ignite a fire of hatred and racial tension. Such was the case in January 2005, when the center of Metro New York's Egyptian population was shaken up by the murder of four Egyptian Coptic Christians in Jersey City. Although the case was dismissed as having a robbery motive, many Egyptian Copts felt that the investigation left many questions unanswered and were convinced that the murder was religiously motivated and instigated by Egyptian Muslims. The Coptic Christians who claim to be the true descendants of the ancient Egyptians and date their Christian heritage to the first century when St. Mark visited Alexandria; have long been persecuted by the Arab Muslim majority in Egypt. Even though they represent only nine percent of Egypt's population, they possibly outnumber Egyptian Muslims in Metro New York. Coptic organizations in Jersey City and the Council on Arab-Islamic Relations in Jersey City estimate their city's Coptic population to be 30 thousand, with the Egyptian Muslim population numbering 25 thousand. These numbers suggest a far larger population of Egyptians than the 2010 American Community Survey count of 52,398 people with Egyptian ancestry in the entire New York Metro area.

When Did They Come to New York? Both Egyptian Copts and Arabs have been steadily moving into New Jersey and New York City since the advent of the Immigration and Nationality Act in 1965. Favoring professionals, this policy change enabled many educated Egyptians to reside in America legally, many of whom were eager to leave the politically unstable situation in their country. While the availability of these professional jobs has waned over the last couple of decades, the steady flow of Egyptians into Metro New York still often has a university education.

Where Do They Live? As the Coptic murder case attests, religious and ethnic tensions abound within the Egyptian community. However, as is common in the New York Metro area, people from the same nation live alongside each other to create their own space of familiar culture, language, food, and services. While the main Egyptian enclave in America is along JFK Boulevard in Jersey City, a new "Little Egypt" has developed on Steinway Street between 28th Avenue and Astoria Boulevard in Astoria, Queens. A general Arab enclave, including a large number of Egyptians, is continuing to develop in Bay Ridge, Brooklyn, as well.

What Do They Believe? With a Christian history that dates back to the first century for the Copts, and a Muslim history that dates back to the seventh century for the Arabs, both groups have a faith that is firmly entrenched in history, culture, customs, and honor. When one group becomes involved in either oppression or proselytization of the other, feuds normally result. The Copts suggested this was the case in the murder story above, as one of the slain was actively involved in attempts to convert Muslims to Christianity over the Internet. A small percentage of Egyptian Copts and Arabs are evangelical Christian.

What Are Their Lives Like? Although zealots exist in both the Egyptian Coptic and Arab Muslim camps, Egyptians are often secular in mindset and behavior. The sharing of shisha, a fruit-flavored tobacco smoked though water pipes called hookahs, is actually more common between the two groups than the feuds that make the headlines. Nevertheless, it is still most common for a Copt to marry and socialize with a Copt, and a Muslim to marry and socialize with a Muslim. Whereas some Copts are active politically to ensure safety and rights for their people back home, most Egyptians are content to leisurely enjoy each other's company at the hands of their financial success in America.

How To Pray: Muslims have recently been coming to Christ in Egypt more than in many Muslim countries in the world. Pray that Egyptians in Metro New York would find salvation through Christ as well.