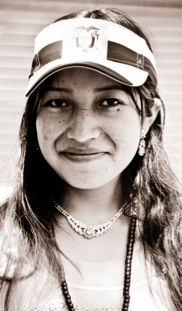 Bio: Ask an Ecuadorian to name the largest Ecuadorian cities, and one is likely to receive the following answer: "Guayaquil, Quito [...] then New York City." At least in popular opinion, New York City has become the third-largest "Ecuadorian" city in the world. Compared to other South Americans, Ecuadorians in the New York Metro area are incredibly diverse. They are service workers, entrepreneurs, and professionals. They are mestizo and Indian. They are even from regions in Ecuador so distinct they could be their own countries. As a result, many Ecuadorians in Metro New York identify themselves first with their city, then by their region, and only then by their country. The country of Ecuador, located on the coast of northwest South America, is divided by the Andes into three regions. The area by the coast and west of the mountains is called the costa. The costeos almost exclusively speak Spanish and are known for being politically liberal. Although not the largest group, there are many costeos in New York. The crowded, mountainous central area of the country is called the sierra, and serranos make up a majority of Ecuadorians in Metro New York. The serranos consist of both mestizo and Quichuan Indians and are known for being politically conservative. Finally, the region to the east of the Andes is called the oriente, a sparsely populated rain forest with a large variety of Indian ethnicities. While people from the oriente make up two percent of Ecuador's population, they are even less represented in New York. Overall, Ecuadorians are now the fourth-largest Hispanic group in Metro New York behind Puerto Ricans, Dominicans, and Mexicans. However, their population in Metro New York has been growing at a faster rate than any demographically significant (more than 20 thousand people) Hispanic group in the area, more than doubling in eight years from 173,966 (Census 2000) to 375,599 (ACS 2008).

When Did They Come to New York? Perhaps it all started with the Panama hat, which is actually made in Ecuador. In the southern region of the sierra known as El Austro, almost a quarter of the workforce lost their jobs due to the collapse of the Panama hat trade in 1947. Former hat merchants and middlemen, who had become familiar with New York City due to the trade, started immigrating to the city in the 1960s. In 1964, land reform in Ecuador ended the centuries-old feudal system, but many peasants, who were not experienced in owning land, also left for New York. Later on in the 1980s and 90s, plummeting oil prices in an economy overdependent on oil caused an economic recession that placed seventy percent of Ecuadorians below the poverty line in 1997. As a result, a mass emigration of Ecuadorians occurred, which was made up of both serranos and costeos, as well as all strata of society. The primary immigrant destination became New York City although Madrid has also become a favored spot since the late 1990s.

Where Do They Live? As evidenced by the countless Ecuadorian businesses along Roosevelt Avenue in Jackson Heights and Corona, around one-third of Ecuadorians in Metro New York live in Queens. Pockets of Ecuadorians also exist in the Bronx, New Jersey, Westchester County, and Connecticut.

What Do They Believe? While Ecuador is almost exclusively Catholic, the El Austro region in the southern sierra has a disproportionate number of Protestants. In 1980, for instance, the Chimborazo province was nearly forty percent Protestant. With a large representation from El Austro, it is not a total surprise that some community leaders estimate one-third of Ecuadorians in New York Metro to be Protestant.

What Are Their Lives Like? Due to the diversity of Ecuadorian New Yorkers, their occupations range from white-collar jobs to jobs in garment shops and sweatshops. Astonishingly, the New York City Department of City Planning estimated that, in 2004, twenty-seven percent of the 490 thousand undocumented immigrants in the city were Ecuadorian. For many, the economic instability of living in Ecuador has simply been traded for that of another kind.

How To Pray: When immigrants from several areas in a country settle together in a place like New York City, the change can often forge a relationship between people who would never have set foot in each other's territories back home. With a large number of evangelicals from the El Austro region, pray that their newfound relationship with other Ecuadorians will be used as an opportunity to expand the reach of the gospel.