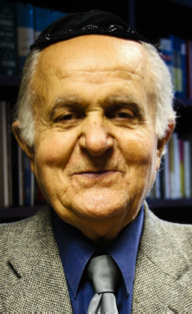 Bio: Although Persian Jews had lived relatively peacefully and successfully for a century in Mashad, one of the largest cities in Iran and a holy site for Shi'ah Muslims, the Shi'ite community suddenly revolted against the Persian Jews in March 1839, storming the synagogues, destroying sacred Torah scrolls, and killing dozens of people. A few of the Jews managed to escape, pleading with the local imam to stop the violence. The imam agreed, on condition that the Jews immediately convert to Islam. Knowing that this was the only way to preserve their lives, the "Mashadi Jews," as they came to be known, agreed to convert. For eighty-six years, the Mashadi Jews openly practiced Islam. They adopted Muslim names, learned the Muslim prayers, attended mosque regularly, sent their children to Qur'anic school, and even took pilgrimages to Mecca. However, from the beginning of the "conversion," the Mashadi Jews made a secret pact to preserve their heritage and religion. In order not to draw suspicion, meat would be bought from the open market only to be given to the dogs while kosher meat was prepared in the confines of Jewish households and distributed secretly from courtyard to courtyard. Although outwardly the members of the community had Muslim names, they were also given secret Hebrew names. Upon return from the Friday prayers at the mosque, the Jewish community would gather in secret meeting rooms to welcome the Sabbath. Stores remained open on the Sabbath, but children would often work on these days instead of their fathers. Even with these precautionary measures, the community would have been exposed and possibly destroyed if intermarriage had taken place. Therefore, the community methodically arranged the marriages of their members to each other at an early age, ensuring that their secret heritage would be spared. To this day, the Mashadi Jews remain one of the most insular Jewish groups in the world, and the four thousand-member Mashadi Jewish community in Metro New York preserves their Mashadi heritage more than any other in the world today. Living alongside the Mashadis are a larger number of "Tehrani Jews," who are simply Persian Jews who are not Mashadi. They number around 11 thousand and are more open to intermarrying and associating with other Jewish groups.

When Did They Come to New York? Although the Mashadi Jews were able to begin practicing their religion openly again in 1925, the spread of anti-Semitism in the 1940s and '50s forced the Mashadi Jews to gradually leave Mashad for Tehran. Some made their way to Israel and America during this time. However, the onset of Iran's Islamic Revolution in the late 1970s sparked the largest wave of immigration, with Persian Jews of all types seeking refuge outside the country. Whereas the largest Mashadi-Jewish population in the world outside of Israel is in Metro New York, the largest Tehrani-Jewish population in the US is in California.

Where Do They Live? Great Neck, the inspiration for F. Scott Fitzgerald's new-money peninsula of "West Egg" in The Great Gatsby, is a Long Island town that has become the setting for "new Persian-Jewish immigrants with money." With gaudy mansions and modern synagogues along Steamboat Road and Middle Neck Road, the Persian Jews, seemingly ostentatious style has been a point of conflict with American Jews and others in the small town. Persian Jews have spread into neighboring Kings Point and Manhasset and still have a presence in their original enclave in Kew Gardens, Queens.

What Do They Believe? Even though their Judaic rituals are similar to each other, as well as to those of other Sephardic Jews, the Mashadi and Tehrani Jews maintain their own distinct synagogues. The Mashadi Jews, with their long history of resilience and faithfulness in preserving their religion, have forged their religious and ethnic identity together and continue to be guarded towards those outside their community.

What Are Their Lives Like? Persian Jews have long been known for being adept at commerce. They are immigrants who have primarily come to Metro New York with money and have only increased their fortune since being here, largely through jewelry and rug businesses. The Mashadi and Tehrani Jews do not particularly like each other, and whereas the Mashadis are very insular, the Tehranis are a little more open to associating with other Jewish groups.

How To Pray: With most of the other Mashadis in the world slowly losing their ethnic identity in Israel, New York provides the best opportunity to engage Mashadi Jews with the gospel. College campuses and the business world provide the most natural opportunities for Christians to interact with Mashadis. Pray for students and businesspersons to walk through the doors God opens. Drug and alcohol abuse by Persian-Jewish youth has become a major community issue. Pray that God would reveal Himself to the Persian Jews by healing broken lives and communities.