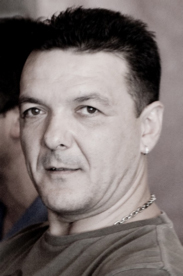 Bio: "Leaving was very dangerous, and getting political asylum in the United States was very difficult. We were lucky!" Decades later, Father Gio, a Catholic priest in Fairview, New Jersey, still remembers the details of his escape from Croatia, which was then part of Yugoslavia. It was right after World War II, and Eastern Europe had just fallen into communist hands. Fearful of what lay ahead, his family fled to Italy, where they stayed in a refugee camp until asylum was granted and they had a promise of a home and jobs with an uncle in the US. Croats share a difficult history with several other ethnic groups in Metro New York that were part of the former Yugoslavia, including Serbs, Bosniaks, Macedonians and Albanians. While Yugoslavia's communist government succeeded in holding together ethnic groups who were enemies for centuries, it began to lose its grip after the Berlin Wall fell in 1989. Yugoslavia disintegrated as its republics declared independence, triggering a variety of brutal ethnic conflicts between 1991 and 2001, collectively known as the Yugoslav Wars. The Croatian War of Independence (1991-1995) pitted Croats who wanted a sovereign country against a minority Serbian population, who wanted to remain part of Serb-dominated Yugoslavia. The heaviest fighting occurred in 1991 when ten thousand people were killed. An estimated 300 thousand people were displaced by the war. Atrocities and ethnic cleansing were alleged on both sides, and suspected perpetrators are still being prosecuted today. Metro New York's Croat population is estimated to number approximately 120 thousand.

When Did They Come to New York? Croats were definitely among the huge numbers of "Slavs" (as anyone from that part of Europe was known) who came during the great European migration in the late 19th century. While most settled in the industrial cities of the Midwest and Pennsylvania, many from Croatia's warm coastal areas kept moving west, ending up in California. Following World War II, a wave of Croats entered the US as political asylees or displaced persons, as Father Gio did. In the 1960-70s, Yugoslavia relaxed its immigration policies, and thousands more were able to leave. Numbers of Croats coming to the US have been fairly low since then, and Metro New York's population is starting to decline as the older generation dies off and others leave the area.

Where Do They Live? Having been in Metro New York for several generations, Croats are well assimilated and spread throughout the area. A few communities stand out, such as Fairview and Cliffside Park in New Jersey, where people from Croatia's Dalmatian Coast primarily settled. Astoria, Queens, one of Metro New York's most diverse communities, is home to many Croats, as are Syosset, Glen Cove, and New Hyde Park in Long Island, and Bridgeport, Connecticut.

What Do They Believe? "To be Croatian is to be Catholic," explained Father Gio. "But half of them just practice traditions; they don't adhere to church teaching," he continued. "I tell them, 'Just because you come for holidays and funerals doesn't mean you are a Christian!" A few churches still hold Mass in Croatian, including St. John the Baptist in Fairview and St. Cyril and Methodius in Manhattan. Only a small percentage of Croats identify themselves with other religious traditions.

What Are Their Lives Like? Father Gio laughed as he explained how Croats are very competitive with each other. "They like to show off, see who can do this or that better." Sports, particularly soccer and basketball, are a popular way to showcase one's talents. Extended family bonds are strong, cemented by frequent get-togethers for Croatian food and music. In addition to using the Internet and satellite television, Croats in Metro New York keep up with news of home by listening to a Croatian radio broadcast from Astoria twice a week and through a newspaper called The Croatian Chronicle.

How To Pray: Many Croats see Catholicism as part of their cultural heritage and have little interest in pursuing a personal relationship with God. Pray that their hearts would be moved by the truths of the gospel.