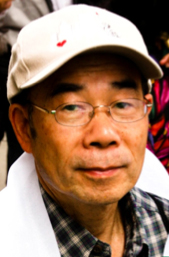 Bio: A children's book published by the Republic of China (ROC, better known as Taiwan) graphically depicts Taiwan as a child being shoved off the globe by other children (international organizations) and another child cowering from the fire of a dragon-headed companion (China). Above the drawing, a Chinese official is quoted as saying to Taiwan, "No one cares about you." These caricatures accurately reflect the sentiment of many Taiwanese in Metro New York. The Kuomintang (KMT), the ruling political party of the ROC, ruled much of mainland China from 1928 until their retreat to Taiwan in 1949 after being defeated by the Communist Party in a civil war. Despite the defeat, the United Nations (UN) still recognized the ROC as sovereign over all of China until 1971, even though it ruled only Taiwan. At that point, political momentum shifted, and the UN transferred China's one seat in the UN from the ROC in Taipei to the communist government in Beijing. The whole fiasco has left people from Taiwan in a politically turbulent position. On the one hand, the ex-mainlanders who were exiled to Taiwan with the KMT identify themselves as Chinese and still desire to be united as one China. On the other hand, native Taiwanese, who have existed for centuries on the island forming their own identity, long to be fully recognized as an independent country. Both desire to participate in and be recognized by the international community. For decades, New York City has been at the center of this political web. Dr. Hong-Tien Lai, a dentist by day, has long been active in the struggle for independence and democracy in Taiwan. He leads yearly rallies and demonstrations at the UN, Times Square, Chinese Consulate, and wherever else he can gain attention for the cause. Dr. Lai claims that ex-mainlanders are proportionately more numerous in New York than in Taiwan. Out of the 44 thousand people in Metro New York who were born in Taiwan (ACS 2010), up to forty percent are ex-mainlanders, and the rest are Taiwanese who are native to Taiwan.

When Did They Come to New York? Growing up under the authoritarian rule of the KMT, young students such as Dr. Lai often went to the movies to dream of living in America. From the 1950s to 70s, many dreams were realized, as studying abroad was practically the only way Taiwanese could leave the country, and American universities were eager to accept students trained in the sciences. Because of martial law in their homeland, many Taiwanese students stayed in America after completing their studies. In the early 1980s, another surge of migration from Taiwan occurred because US visa quotas were raised to 20 thousand a year. However, with the democratization and economic stabilization of Taiwan developing in the mid-1980s, immigration to America quickly tapered off.

Where Do They Live? Flushing's Chinatown rivals that of its better-known counterpart in Manhattan. However, the one in Flushing has a large Taiwanese influence, even though Taiwanese continue to spread into neighboring Oakland Gardens, Bayside, and Fresh Meadows as well as central and northern New Jersey.

What Do They Believe? Even though Christians number about four percent of the population in Taiwan, they number over twenty-five percent in Metro New York. There are at least two reasons. First, New York Taiwanese are more educated than their compatriots back home, and East Asian intellectuals have high conversion rates to Christianity. Second, the Taiwanese church has long been active in social justice, which creates an outlet for politically active Taiwanese Americans. Overall, Taiwanese are more religious in America, which applies to the majority's Buddhist practices as well.

What Are Their Lives Like? Due to the nature of early emigration from Taiwan, Taiwanese New Yorkers are highly educated and predominantly involved in business and the medical industry. Furthermore, many use their platform in New York to advocate for Taiwanese political concerns.

How To Pray: Pray for social justice and international inclusion for Taiwan but also that the enthusiasm Taiwanese Christians exhibit for political concerns will carry over into their relationship with Christ in every aspect.