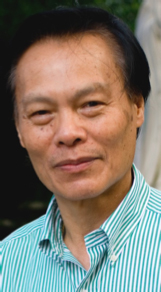 Bio: "The most important thing to know about us is that we accept everyone," said Ricky, a former tour guide from Thailand and regular worshipper at the Thai Buddhist temple (known as the Wat Thai) in Elmhurst, Queens. "We even have a special worship room upstairs just for people from other religions," he explained. One of the reasons behind this inclusiveness is the high rate of intermarriage between Thai and Americans. Instead of rejecting mixed-religion couples, Buddhist leaders typically encourage them to embrace both faiths and pass on to their children a "double heritage," equal participation in the religious communities of both parents. This dual religious identity means that many Thai-American families are accustomed to attending Midnight Mass at a Catholic Church on Christmas Eve and performing merit ceremonies at the Wat Thai on Christmas Day. One expert claims Thai Buddhist temples have become the most ethnically diverse Asian-American religious communities in the US. Community leaders estimate Metro New York's Thai community numbers 30 thousand people.

When Did They Come to New York? Immigration from Thailand was nonexistent until the mid-1960s. During the Vietnam War, the Thai government allowed the US to use military bases and station thousands of American servicemen in Thailand. This led to a wave of marriages between US servicemen and Thai women in the 1960s and '70s. Once the door to the US was open, others came seeking educational and job opportunities. However, the ratio of women to men continued to be skewed. During the 1970s, three Thai women immigrated to the US for every Thai man. The 1980s saw the largest influx of Thai, with approximately 6,500 per year arriving in the US. Today, Metro New York has the second-largest Thai population in the US after the Greater Los Angeles area (ACS 2008).

Where Do They Live? "We are scattered around the New York area, but Woodside, Elmhurst, and Jackson Heights in Queens are home to many Thai," said Ricky. Several Thai restaurants and stores can be found along Broadway and Woodside Avenues in Elmhurst. Most neighborhoods boast at least one Thai restaurant, as the Thai have established a presence both in New York City and the suburbs of Metro New York. Thai Buddhist temples are also spread out across the Metro area, from Queens to the Bronx, and from Mahwah, New Jersey to Centereach, Long Island.

What Do They Believe? Despite their inclusiveness, most Thai believe "to be Thai is to be Buddhist." Almost ninety percent of Thai, along with most Burmese, are Theravada Buddhists. Theravada emphasizes the individual's responsibility to reach spiritual awakening by following the Eightfold Path of Buddha and rooting out "cravings" for sensual pleasures, which are the cause of human suffering. It is believed that once a person dies, his or her soul does not persist into the next life, but a new personality is born, whose circumstances are determined by what was before. As a result, Theravada describes this continuity as rebirth, not reincarnation. The Thai tend to focus on the practical aspects of Theravada, such as tam bun or "earning merit," and baap, which means "avoiding demerit," in order to improve their present and future lives. In a survey of Thai Buddhists in America, ninety-two percent said tam bun was the primary reason for going to temple. Metro New York also has a small Thai Muslim population, along with several hundred Christians, the spiritual descendants of missionaries who first came to Thailand in 1828. Although Metro New York has three Thai evangelical churches, located in Yonkers, Astoria, and Jackson Heights, they are small, and outreach to the community is limited.

What Are Their Lives Like? "We come here for jobs, that's the only reason," Ricky explained. The Thai community in Metro New York primarily consists of first and second-generation immigrants, and most come from the cities of Bangkok and Chiang Mai. While the Thai work in many different professions, significant numbers are involved in the restaurant business as owners or workers. Restaurants are often family enterprises, requiring all members, including children, to pitch in as needed.

How To Pray: Although the Thai often state that all religions are equally good, they have been very resistant to Christianity. Pray they would see how Jesus has provided the merit they need for eternal life.