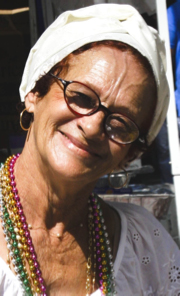 Bio: Ask a Brazilian living in the Ironbound section of Newark, New Jersey, where he comes from, and the likely answer will be Governador Valadares, a city in the state of Minas Gerais in southeastern Brazil. Asking the same question of a Brazilian in Mount Vernon in Westchester County will probably elicit the response, Po de Caldas, a resort town also located in Minas Gerais. The response of Minas Gerais will also be heard in Astoria, Queens, where almost half of Brazilians trace their origins back to the large coffee and emigrant-producing state of Brazil. Indeed, out of an estimated 71 thousand people with Brazilian ancestry in Metro New York (ACS 2010), a majority hail from this one state. The connection was made when US companies went to Minas Gerais in the 1940s to obtain mica, a mineral needed for the defense industry. When Brazil's economy collapsed in the 1980s, thousands of Brazilians made their way to Metro New York. Although many were middle-class professionals, they took any job available and began sending money back home. At one point, five million dollars a month was sent into Governador Valadares, and most of the new housing in Po de Caldas was financed with Mount Vernon money. While the US economy is now faltering, Brazil's is growing, causing the dollar's influence in Brazil to wane. These factors, along with the burden of being undocumented, are leading many Brazilians to return home.

When Did They Come to New York? In the 1980s and '90s, thousands of Brazilians desperate for financial security made their way to Metro New York. Brazil's inflation was so extreme that people would race through the supermarket to beat the constant price increases. Most came on tourist visas, found under-the-table jobs, and stayed. Community leaders agree the vast majority of Brazilians are undocumented.

Where Do They Live? Only a few Brazilian merchants remain in Little Brazil on West 46th Street in Manhattan, once a thriving commercial center. The largest Brazilian community in Metro New York is in the Ironbound section of Newark. Brazilians have revitalized this historically Portuguese neighborhood, with shops, bakeries, and restaurants lining Ferry Street. In Astoria, Brazilians live and work in a thriving multi-ethnic community concentrated around 36th Avenue and 31st Street. In Mount Vernon, a city of 70 thousand in Westchester County just north of the Bronx, an estimated one in ten residents is from Brazil.

What Do They Believe? Since Brazil is the world's largest Catholic country, the majority of Brazilians in Metro New York are Catholics although most are nominal believers. Many active Brazilian Catholics are finding a new spiritual home in Pentecostal churches, where the vibrant worship style is similar to the lively Masses they had in Brazil, and abundant social activities help them make friends and feel at home. Counting other evangelical churches such as Presbyterian and Baptist, there are now around forty-five evangelical Brazilian churches in Metro New York. Brazilian Catholicism, though, has been heavily infiltrated by occult practices and spiritist religions, most notably Santer­a, which was brought to the New World by African slaves and involves animal sacrifices and communication with the dead.

What Are Their Lives Like? When Brazil's economy went into free fall, Brazilian money was useless. Since having American dollars was key to economic survival in Minas Gerais, thousands of people left family and friends to come to Metro New York. Hoping to earn as much money as they could as housekeepers, dishwashers, and shoe-shiners, only to return to Brazil once the economy recovered, Brazilians have not laid down roots in the US. As a result, Brazilians have little socio-political clout. Their uniqueness as non-Spanish speaking Latinos of mixed European, African, and American Indian ancestry means they have struggled to fit into America's prescribed ethnic categories. With an improved economy back home, along with the lure of family and a much more relaxed Brazilian pace, many Brazilians are moving back home or beginning to seriously consider the possibility.

How To Pray: Brazilian Christians are leading a new wave of South American missionaries that is spreading the gospel in Muslim countries around the world. Pray that their sociable personalities will assist them in crossing cultural lines in Metro New York to share the joy of Christ with Muslims and others.