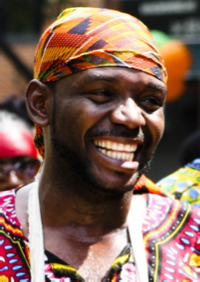 Bio: With dark-skinned men wearing "Garifuna Celebrity" T-shirts, a variety of hand drums providing the event's soundtrack instead of brass instruments, and Garifuna yellow, black, and white flags largely replacing the blue and white of Honduras, Bronx's annual Honduran and Central American Parade is somewhat of a misnomer considering the celebration is almost exclusively a display of Garifuna presence. As a reminder of her heritage, a Honduran woman marching in the parade carries a miniature ship with the word "Garifuna" on its side. In 1635, two Spanish ships carrying West African slaves shipwrecked off the coast of St. Vincent. The Africans escaped, swam to shore, and were sheltered by the island's inhabitants, a mixed race of Arawaks and Caribs known as Island Caribs. Over the coming years, the Africans intermarried with the Island Caribs, and the blend of ancestry, language, religion, and traditions created a new people called the Garifuna. The Garifuna pride themselves on having never been enslaved although they were forced off St. Vincent by the British in 1797. At first settling in Roatan off the coast of Honduras, the Garifuna soon ventured to the coastland of Honduras, Belize, Guatemala, and Nicaragua, where they remain today as minorities in their respective countries. In Metro New York, however, a majority of the Hondurans are Garifuna, and out of all of the Garifuna in the city, roughly seventy-five percent are from Honduras, fifteen percent from Belize, and ten percent from Guatemala. Most Garifuna community leaders estimate their population to number over 100 thousand in Metro New York.

When Did They Come to New York? Due to a crippled banana industry and America's need for sailors during World War II, many Garifuna men signed up as merchant marines, taking them to great port cities such as New York City. Allowing their unemployed friends on board as stowaways, adventurous Garifuna clandestinely made their way to live and work in New York. After Hurricane Hattie wreaked destruction on the coastline of Central America in 1961, America opened its doors to refugees, and a great number of Garifuna joined and strengthened their community in New York City. After the 1960s, migration has largely consisted of Garifuna reuniting with families or overstaying visas.

Where Do They Live? Although Garifuna move in and out of the African-American and Hispanic-Caribbean populations in Harlem and the South Bronx, they have established their own cultural spaces in the neighborhoods with their own restaurants, community centers, dance clubs, and even parks, such as Trujillano Park on Southern Boulevard in the Bronx, which is actually named after a town in Honduras.

What Do They Believe? While the majority of Garifuna are Roman Catholic, traditional Afro-Indian beliefs remain a strong part of Garifuna religious life. The weeklong Dugu (Feasting of the Dead) is the most important of three ancestral rites and involves a great amount of food, beverage, music, chanting, and dancing. Although it is a joyous time for the Garifuna who join together in celebration, its purpose is to appease an ancestral spirit, who is communicated with through a shaman, and to gain guidance for the present and future. Sometimes even a Catholic Mass will be included in the proceedings. In the Bronx, a traditional Garifuna Mass is celebrated on the third Sunday of each month at St. Anthony of Padua Catholic Church. There is also a strong evangelical community, with over ten Garifuna churches currently in New York City.

What Are Their Lives Like? "Am I Hispanic, or am I African-American? Or neither one?" These are the questions that often go through the minds of younger Garifuna in New York. As a result, much effort has been made by the Garifuna community to promote their history, culture, language, and identity. Although the Garifuna work a variety of jobs in New York, many are educators or involved in health care.

How To Pray: The Honduran Garifuna have responded to the gospel much more than the Belizean and Guatemalan. Pray that God would reveal His power over evil spirits and call Garifuna to Himself.