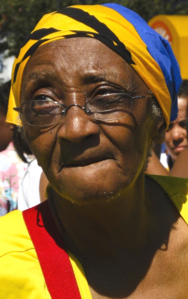 Bio: Although the British have left their trail throughout the Caribbean, nowhere is it seen more than in the easternmost island of the West Indies. The country of Barbados, which hosts more British tourists than American, has long been known as Little England. The British settled the uninhabited island in 1605, developed it into one of its most successful colonies with sugar production, and ruled without interruption for 350 years. In 1966, Barbados gained its independence, but Britain's mark remains strong. The Queen of England is still the country's head of state, the government is patterned after the British Parliament, British people and place names abound, and even high court judges wore white horsehair wigs until recently. Furthermore, the people of Barbados are known for their refined accent and manner, and African influences are much more subdued in Barbados than in other Caribbean countries with populations of African ancestry. Almost all Barbadians, known as Bajans, are of African descent and speak a unique Creole English also called Bajan. While over 26 thousand Metro New Yorkers were counted as born in Barbados (ACS 2010), the Barbados Consul General in New York estimated their population to number 150 thousand in the Metro area. Only 284,589 people currently live in Barbados.

When Did They Come to New York? In the first two decades of the twentieth century, a West Indian immigrant community that included Barbadians began to develop in New York City. Stalled by restrictive policies, immigration did not pick up again until the 1950s. However, it was a US policy change in 1965 that ensured a steady inflow of Bajans searching for opportunities. Apart from being one of the most densely populated places on earth, Barbados has presented no major reasons for its people to emigrate. The country is stable economically, politically, and socially. Because of this, most Bajan New Yorkers come for educational or economic opportunities and retain close ties to their country. One Bajan New Yorker shrugged off the difference between his home country and New York by saying, When you come to New York, you've gone to Barbados.

Where Do They Live? There is only one place in Metro New York where people might feel that they are in Barbados, and that is East Flatbush, Brooklyn, and the surrounding neighborhoods. The area has a high concentration of English-speaking West Indians, and fifty-four percent of Metro New Yorkers born in Barbados live in Brooklyn, primarily in this one area.

What Do They Believe? Clergy throughout the West Indies go to Barbados to study, a Bajan Episcopalian priest in Brooklyn claimed. The first documented religion in Barbados was the Anglican Church, which is the Church of England, and its influence remains to this day. A majority of Bajans have some sort of connection with the Anglican Church (Episcopal is the American equivalent), and Bajan priests are disproportionately represented among the Episcopalian clergy in Brooklyn. The Pentecostal movement also claims a large number of adherents, and their number only continues to grow. Strikingly absent is the presence of an Afro-centric Caribbean religion such as voodoo, Shango, or Pocomania, reflecting the limited influence African traditions have had in Barbados compared to other Caribbean countries.

What Are Their Lives Like? Bajan professionals certainly exist, but most Bajans have what is the common lot for immigrants: domestic, construction, and service jobs. Bajans usually aspire to buy a house, and part of the attraction of Brooklyn is the abundance of houses suitable for large families. Once they buy a house, extended family members often live under one roof, sharing cooking responsibilities in their own little island in New York. One of their favorite dishes is an African carryover Barbadians call cou-cou, which is firm cornmeal, usually served with slimy okra sauce and steamed or fried flying fish. The politics of Barbados is a favorite conversation topic over dinner.

How To Pray: With the long Anglican history in Barbados, many Bajans associate the faith with tradition, and some even consider it a colonial leftover. Pray that God would bring them fresh understanding and faith in the timeless message of salvation from sin through the death and resurrection of Christ.