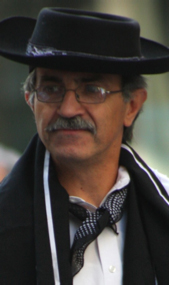 Bio: If there is one thing you should know about Argentines, it's that we love our meat and soccer! Our lives are centered on these things, exclaimed Jonathan. His fellow Argentine friends, Steven and Christian, happily confirmed this. Soccer is a huge part of Argentine culture, said Christian. We play it every week. We watch it on television. We are always talking about it! It connects us together and reminds us of home. As for the meat-loving aspect of Argentine culture, Steven explained that Argentines get together every Sunday for a traditional asado, a finger-licking barbeque featuring different types of grilled meat. A recent study estimates there are as many as 50 thousand Argentines in Metro New York. Significant numbers of recent arrivals are undocumented, like Steven and Christian, who came to visit family members but found jobs and decided to stay. Like the US, Argentina is a nation of immigrants. Once a country of silver mines and prosperous cattle ranches, it attracted millions of Europeans seeking to make their fortune in the early twentieth century. Ninety percent of Argentines are descendants of those Italian and Spanish immigrants.

When Did They Come to New York? While Metro New York has been welcoming Argentines since the 1960s, around half of the current population arrived in the 1980s and '90s. Early Argentine immigrants followed the classic brain drain pattern of highly educated professionals seeking better opportunities in the US. Later waves were less educated. Most were fleeing persecution at the hands of a military dictatorship that was waging a dirty war against its opponents. An estimated 30 thousand people were killed or simply disappeared between 1976 and 1983. In 2001, after years of government corruption, Argentina's economy collapsed, driving half of the population into poverty and destroying the Photo by Kristine Endsley country's middle class.

Where Do They Live? The New York center for all things Argentine is how The New York Times described the intersection of Junction Boulevard and Corona Avenue in Elmhurst, Queens, in 2001. Less than ten years later, just a few restaurants and bakeries remain of what was Metro New York's main Argentine community. With their European features and high levels of education and skills, Argentines assimilate more easily than other Hispanic immigrants. Argentines themselves have a difficult time identifying where their compatriots live. As Marciella, a waitress at one of the remaining Argentine restaurants in Elmhurst, said, Everyone is so spread out now.

What Do They Believe? I pray every night, Steven explained, but I don't go to church anymore. I just don't think I need a priest to talk to God. Much like Italy and Spain, to which most Argentines trace their roots, Argentina is a historically Roman Catholic country that has become post-Christian. Although over ninety percent of Argentines are Catholic, only an estimated twenty percent practice their faith. Unlike other parts of Latin America where evangelical Christianity is exploding, Argentina is again more similar to Europe, with just a small minority of evangelicals. Only two churches in Queens are known to be actively ministering to Argentines. One church started a soccer outreach, tapping into passion for the sport to build relationships and open doors.

What Are Their Lives Like? I have no plans to return to Argentina, Steven said. This is my home. I've been through 9/11 and the Iraq War. I feel connected to this country. Jonathan chimed in, Life is good here. I can make lots of money and things are easier. With big smiles, they described the best part of their week: Sundays! We always have barbecues and play soccer!

How To Pray: Many Argentines do not think they need church, but they want God. Pray that outreaches such as soccer ministries will open doors and help them pursue a relationship with Jesus.