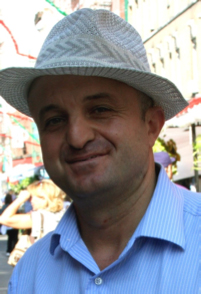 Bio: Ah, New York, a place where great Italian food and mafia activity often go hand-in-hand. However, before picturing a large Italian godfather-type running organized crime out of the basement of an Italian ristorante, one should know that times are changing a bit in the Big Apple. Albanians are quickly becoming the new Italians. They now own over 100 Italian restaurants in the city and have an organized crime syndicate, called the Rudaj Organization, that rivals the great Italian mob families of the city. The Albanians come from an area of the world where survival has always been the modus operandi. Due to constant unrest and instability in the Balkans, an estimated 200,000 Albanians have now moved their residence to the New York City Metro area. They consist of two main ethnicities that are divided along geographic and linguistic lines. The Albanian Gheg come from north Albania, Kosovo, Macedonia, and Montenegro. The Albanian Tosk are primarily from central and south Albania. Each have their own distinct communities and organizations in Metro New York.

When Did They Come to New York? The ceaseless political strife in the Balkans led to a constant flow of Albanian migration to New York in the 20th century. The first large group came in the early 1900s due to political reasons. After Albania came under Communist control in the 1940s, another wave came. A large group of Albanians, mainly from Kosovo, Macedonia, and Montenegro, came in the 1960s after Yugoslavia loosened emigration restrictions. More recently, the fall of Communism in the 1990s has led more Albanians to America, with some reuniting with families, some coming on diversity visas, and some remaining here illegally on expired temporary visas.

Where Do They Live? There are six main locations of Albanians in Metro New York, with ethnic backgrounds normally determining settlement patterns. The largest concentration is in the Bronx, particularly around Belmont and Bedford Park. This community is dominated by Gheg Kosovars. Along the east shore of Staten Island, a large community of Ghegs from Macedonia and Montenegro can be found. Ridgewood, Queens is the dwelling place of many Tosk speakers from south and central Albania. Waterbury, CT is the host of Albanian Tosks primarily from one county in southeast Albania, as well as from southwest Macedonia. Bath Beach and Flatbush in Brooklyn have Tosk speakers from south Albania, while Garfield and Paterson, New Jersey have a Tosk majority from south and central Albania.

What Do They Believe? An Albanian blogger, after pointing out the religious adherence of Albanians (70% Muslim with 20% being Sufi Bektashi, 10% Catholic, 20% Albanian Orthodox), summed up the religious sentiment of Albanians by saying, The only god we have is ourselves. We are in fact agnostic! Though these statements and figures may be true, the religious demography of Albanians varies widely in each of their communities in Metro New York. The Bronx population, while having some Catholics from northern Albania, are mostly Kosovar Muslims. The Gheg in Staten Island are perhaps 60% Muslim and 40% Catholic. The population in Queens, many of whom speak Greek and have been influenced by Greek culture, are about 1/2 Orthodox Christian and 1/2 Muslim. Albanians in New Jersey and Brooklyn are around 70% Muslim and 30% Orthodox Christian, while the population in Connecticut is primarily Muslim.

What Are Their Lives Like? Not surprisingly, considering the history of their people, Albanians are very suspicious of outsiders, very selective in who they socialize with, and are incredibly cliquish with people in their own ethnic group and/or religious organization. They are pressed for time, as many work long hours in service jobs, while others work hard as owners of stores, restaurants, and buildings.

How To Pray: Three of the main areas where Albanians live (Bronx, Queens, Waterbury) have no known ministries working among Albanians. Pray that Albanian Christian leaders will be raised up start churches in these areas. Pray that the two Albanian evangelical churches in Metro New York, one in Clifton, NJ, and one in Brooklyn, will be fertile fields for raising up Christian leaders and disciples. Pray that the few Albanian Christians will be able to spread the Gospel through relationships.